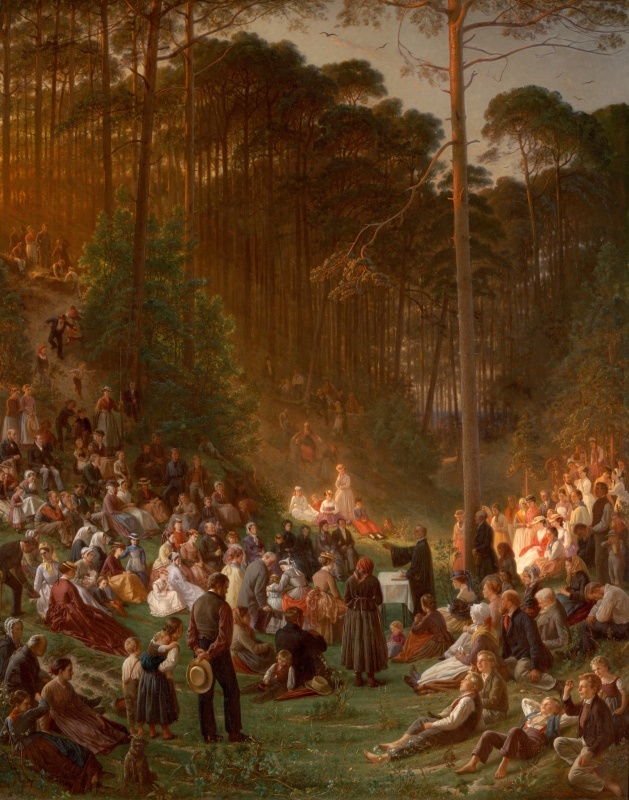 Paul Bürde was best known as a genre painter in mid-19th century Berlin. He participated regularly in the city’s annual Academy of Art exhibitions from the age of 23, entering scenes of family life as well as grander compositions. He was also known as a lithographer, and his prints portraying government officials and musicians who served the Berlin court brought him fame.

In this painting, townspeople gather in a forest clearing to hear an impassioned religious service. As in the United States, the 19th century in Germany was a time of religious renewal, especially in the Protestant North. Bürde emphasizes the simplicity of this fervor as the preacher in the center spreads the word of God without lavish ceremony or liturgical objects. The glorious light filtering through the trees symbolizes God’s presence in nature, a Romantic notion brought to a specifically religious subject. Not everyone pays equal attention to the preacher, however. A man sleeps at right, and a group of boys lounges on the grass in the right foreground while one of them throws a stone at the young lady at left. This painting is most likely the one Bürde is known to have shown in the 1870 Berlin Academy exhibition where it was entitled A Religious Service in the Woods near the Baltic Sea.