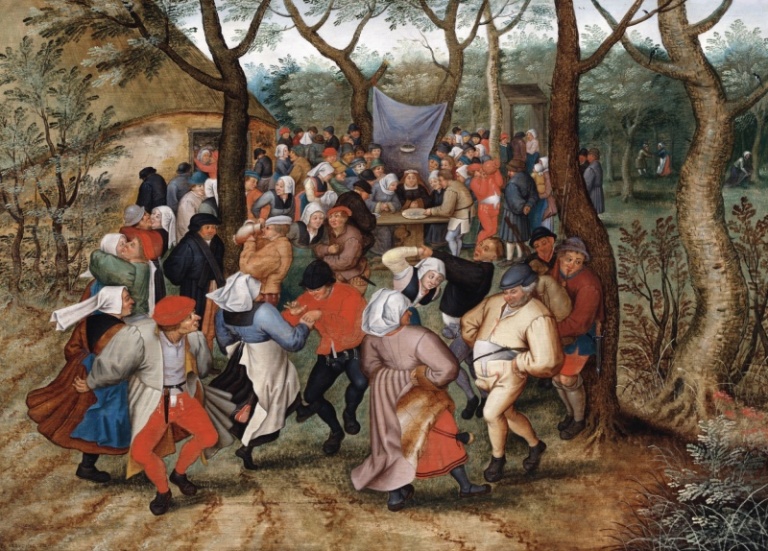 In 16th- and 17th-century Flanders, the Brueghel family specialized in painting humble subjects, carving a niche for themselves in the market during the dominance of more flamboyant Italianate painters. Pieter Brueghel the Elder, for example, concentrated on scenes of daily life and landscapes. Though these sometimes bore classical themes, they nevertheless demonstrated the artist’s keen eye for human nature. He died when his son Pieter Brueghel the Younger was a child.

In addition to the experience of his father’s paintings, Pieter the Younger received training at the hand of his grandmother Mayken Verhulst, an artist in her own right who worked in watercolors. The family moved to Antwerp around 1578. By 1585, he was a member of the Antwerp painters’ guild, and though evidence suggests he was never as financially successful as other members of his family, he kept a large and active studio. Among his pupils was Frans Snyders, who later painted animal scenes and collaborated with Peter Paul Rubens. Many of Brueghel’s works were based on his father’s compositions, taking advantage of the path that the elder Brueghel had prepared for him.

Like many other painters of daily life in the 17th-century Netherlands, Brueghel hides the subject of his Peasant Wedding. Only after the eye has taken in the foreground revelers, their dance echoed by twisted trees, does the bride sitting beneath the wedding wreath become apparent. The composition must have been especially successful, since several autographed versions of this painting are known.