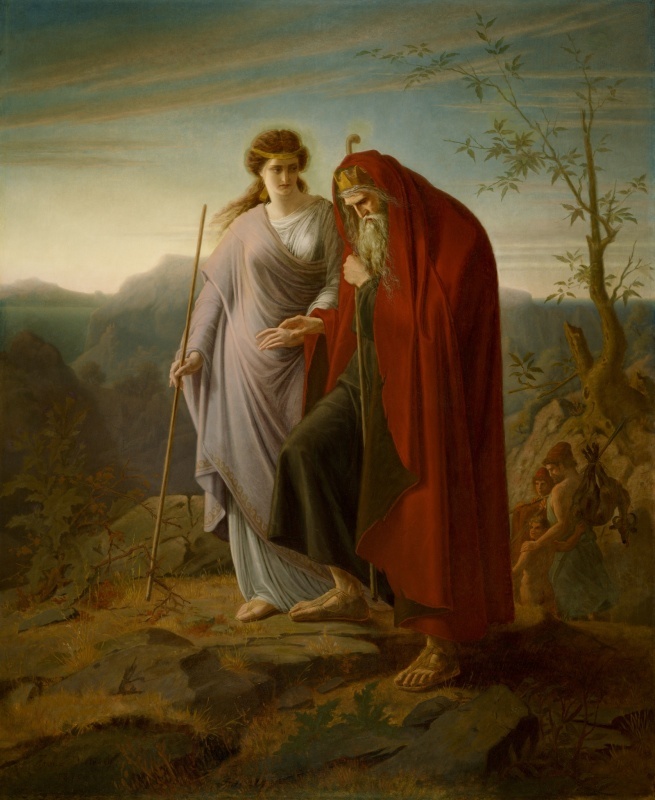 Franz Dietrich was born in the town of Meissen, began his studies at the Dresden Academy, and later trained in Nuremberg, Munich, and Antwerp. Settling in Dresden, he received commissions for religious paintings in Bohemia, where he decorated a chapel in Friedland (now known as Frydlant in the Czech Republic), as well as varied commissions in Hungary. He returned to Munich at the end of his life.

In this painting, Dietrich depicts the tragic aftermath of the story of Oedipus from Sophocles’ play. The king of Thebes, Oedipus was abandoned as a child because of a prophecy that he would kill his father and marry his mother. Rescued by a herdsman, he was adopted as a prince of Corinth. As a young man, he consulted an oracle about his parentage and learned he was the son of a man named Laius. He fled the town and, following a roadside dispute, killed a man. Once Oedipus reached Thebes, he was proclaimed king and married Queen Jocasta. The tragic revelation that the man he had killed was Laius, king of Thebes, and that the prophecy had come true, drives him insane, and he blinds himself. Exiled from Thebes, he wanders the world with his daughter Antigone as his only companion. Here, Dietrich chooses a moment of filial devotion in the face of tragedy, setting the monumental figures in a twilight landscape. In a later play, Antigone herself is the center of tragedy, defies a king, and commits suicide while imprisoned.