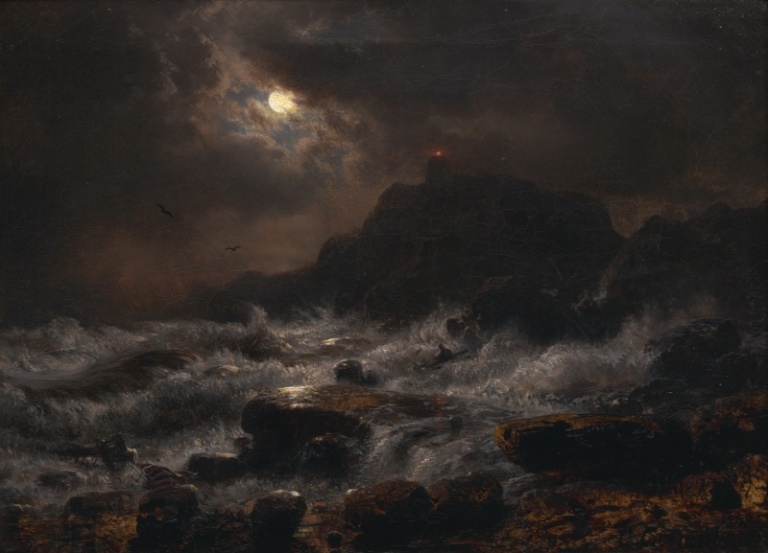 Andreas Achenbach, the son of a successful merchant in Kassel, enjoyed the support of his family, who sent him to study at the Düsseldorf Academy at the age of 12. Working under Wilhelm von Schadow, Achenbach showed such talent that his father took him on his travels to the Netherlands and the Baltic states in 1832–33. In the Netherlands, he was exposed to 17th-century landscape painting, which reinforced his German training in the subject, while the Latvian coast inspired his later interest in marine painting.

In 1835, Achenbach went to Munich to study under the painter Louis Gurlitt, who turned the young artist’s attention to the realistic current then gaining popularity. He traveled widely throughout Europe in the late 1830s and 1840s, from Norway to Southern Italy as well as through the Bavarian and Austrian Alps. He settled in Düsseldorf in 1846 and became a leader in the city’s artistic life, both in arts organizations such as the Malkasten and as a teacher.

In this painting, which dates from Achenbach’s early maturity, the memory of his trip to the North Sea coast of Scandinavia is still fresh. The churning drama of the waves and the foreground shipwreck reflect a heightened emotion that belie the artist’s realist training in Munich. The birds flying through the storm contrast with humanity’s helplessness in the face of nature.