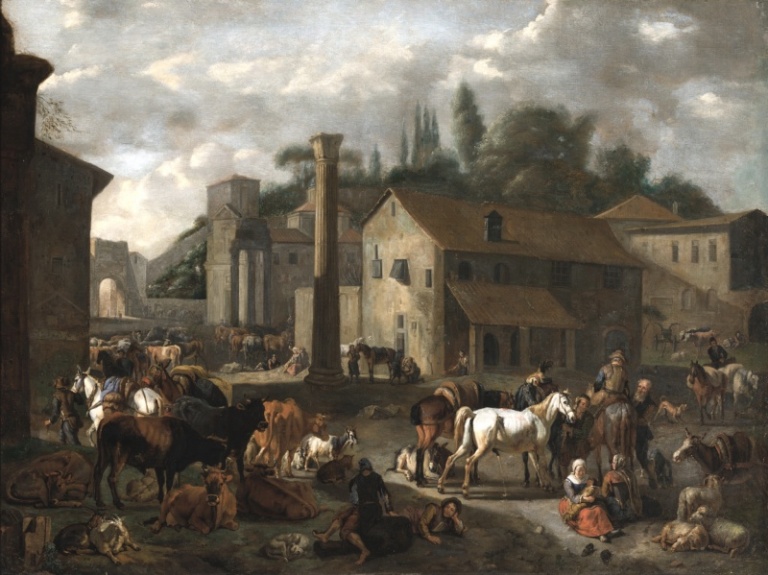 The Antwerp family van Bloemen included three artist brothers, all of whom lived in Rome. Pieter, the eldest, trained with the battle painter Simon Douw from the age of 10. Seven years later, he became an independent artist with membership in the Antwerp painters’ guild. Though he traveled to Rome perhaps as early as 1674, he and his brothers did not settle in the city until 1686 or 1687. A member of the Schidersbent, the boisterous company of Northern artists in Rome, Pieter earned the nickname Standaart, or lo Stendardo in Italian, because of the many banners, or standards, in his battle scenes. Though he painted landscapes and portraits as well, battles were his specialty. These were especially popular among Italian patrons, and he seems to have collaborated with other artists in painting them. Five years after his return to Antwerp in 1694, he became head of the city’s painters’ guild.

The ancient buildings and ruins of Italy, and the casual way in which they were integrated into contemporary life, enthralled the many visiting Northern artists in the 17th century. Here, the artist, perhaps with some additions from his fantasy, depicts the Roman Forum. Then unexcavated, it was known as the Campo Vaccino [cow field] and was the background for a cattle market. The contrast between ancient and modern is palpable: the arch of Septimius Severus, through which Roman emperors and armies had entered the city, serves as the entrance for cowherds and their families who relax as the bargaining begins.