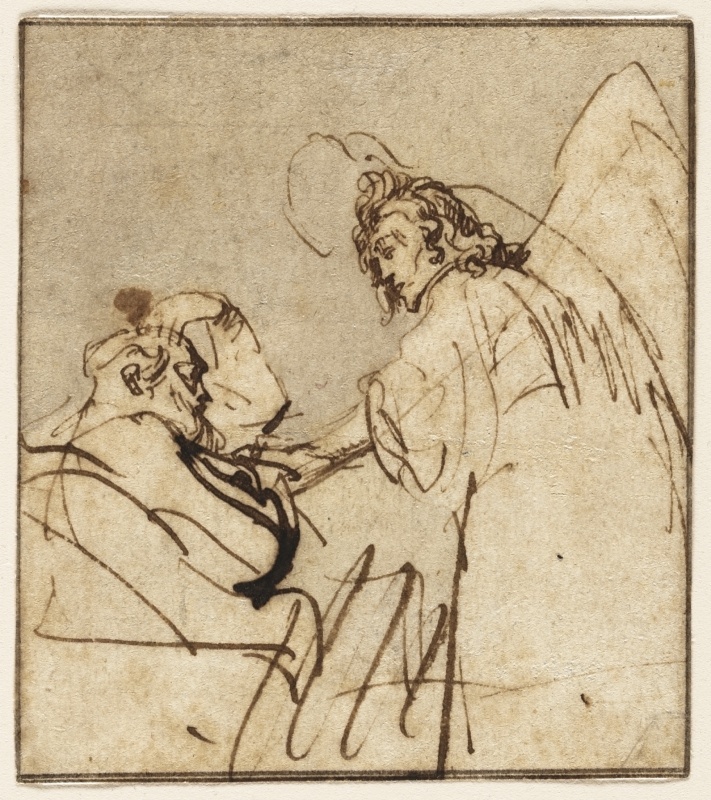 One of the most prolific and accomplished draughtsmen in the history of art, Rembrandt van Rijn (1606–1669) viewed drawing as a matter of central importance to his own work as well as to that of his many students. He made direct preparatory studies relatively rarely, and most of his surviving drawings do not relate directly to a painting or print. Instead, many of his sketches appear to have functioned partly as exercise for the imagination, independent of finished works of art.(1) Leader of a thriving workshop even early in his career, he passed on this habit to his students, apparently setting them the assignment of drawing a particular subject as a way of learning to compose and to express emotion and narrative. Like other masters of the time, Rembrandt also used his own sketches as teaching tools .His students made careful copies of his drawings, transcribing even the scribbles and pentimenti characteristic of his rough draughtsmanship. They absorbed his style so thoroughly that many of them continued to draw in Rembrandt’s manner long after they left his workshop. For all these reasons, the task of separating Rembrandt’s own drawings from those of his pupils is a particularly arduous task.

In many ways, The Liberation of Saint Peter fits into Rembrandt’s draughtsmanship of the mid-1630s, as it was dated by Otto Benesch. Rembrandt drew in an especially sketchy style at this point, sometimes simply indicating subsidiary figures.(2) He clearly reveled in the expressive possibility of the pen line, varying the pressure to create thick and thin lines, leaving pentimenti clearly visible, and shading with scribbles rather than with the neater techniques more common among his Dutch contemporaries. The Crocker drawing fits this pattern: an earlier version of the angel, positioned higher on the page than the final version, remains clearly visible, and his finely delineated face forms a striking contrast with the rough, heavy lines on the lower part of the page. This same contrast appears in a number of Rembrandt’s drawings from the mid 1630s, such as the Lamentation under the Cross or Ruth and Boas, both in Berlin.(3) Compositionally, the Crocker sketch also has a great deal in common with several drawings by Rembrandt and his school from the mid-1630s.(4)

Nevertheless, other aspects of the Crocker drawing deviate from Rembrandt’s style of draughtsmanship. Most notably, The Liberation of Saint Peter exhibits a lack of clarity in both form and expression. Even in Rembrandt’s roughest drawings, elements crucial to the narrative content of the drawing, such as facial expression or gesture, are generally described with a lucidity absent from this sketch. Not only are the attitudes of the two figures here difficult to read, but their poses are also indistinct: the angel’s body and wings are left almost totally blank, leaving its pose unclear, and the vaguely defined limbs, including the awkward foreshortening of the angel’s arm and its claw-shaped hand, are more typical of student drawings than of those by Rembrandt himself.(5) Finally, the almost calligraphic scribble in the lower foreground serves no clear purpose: Rembrandt was more likely to use this rough shading to darken areas thrown into shadow, again contributing to the weight of the forms.(6)

In the same way that the Rembrandt Research Project, formed in 1968, has attempted to separate the hands of Rembrandt and his followers in paintings,(7) similar efforts are taking place as major museums reconsider their collections of drawings attributed to the artist.(8) The results have been startling: in Berlin, for example, the collection of 126 drawings once believed to be the work of Rembrandt has been pared down to a group of fifty-five.(9) Among the casualties of these re-examinations have been several of the drawings once compared to the Crocker sketch.(10) Because of the scarcity of signed or preparatory sketches by Rembrandt and the proximity of his hand to those of his many students and followers, his style of draughtsmanship is redefined with each generation of scholarship, and it is likely that in decades to come, the current definition will be viewed as too narrow. At this time, however, the possibility must be considered that the Crocker sketch is the work of a follower rather than that of Rembrandt himself.

(2) See, for instance, The Rape of Ganymede, Dresden (Benesch 1973 as in Literature above, no. 92), where the figures of the parents are roughed in and surrounded by a chaotic tangle of lines.

(3) Benesch 1973 as in Literature above, nos. 100 and 133 respectively. For a thorough discussion of these drawings, see Holm Bevers, Rembrandt, die Zeichnungen im Berliner Kupferstichkabinett, Berlin, 2006, nos. 9 and 10.

(4) See, for instance, Ruth and Boas (Benesch 1973 as in Literature above, no. 133); Lot and His Daughters (ibi, no. 128); and two student drawings in the Rijksprentenkabinet, in Peter Schatborn, Tekeningen van Rembrandt, zijn onbekende leerlingen en navolgers, Amsterdam, 1985, nos. 74 and 75.

(5) See, for instance, both versions of Jacob Blessing Josephs’ Sons in the Rijksprentenkabinet (Schatborn 1985 as in note 4 above, nos. 74 and 75).In addition, the Old Man in Profile (Benesch 1973 as in Literature above, no. 1106) at the Metropolitan Museum of Art, exhibits a similar lack of modeling and is now assigned to “Rembrandt(?).” Carolyn Logan, in Walter Lietdke et al., Rembrandt/Not Rembrandt in the Metropolitan Museum of Art, Aspects of Connoisseurship, exh. cat. New York, 1995, no. 67.

(6) Compare, for example, the more coherent use of hatching in the equally abbreviated Ruth and Boas (Benesch 1973 as in Literature above, no. 133).

(9) Bevers 2006 as in note 3 above, p. 6. Other re-evaluations have had similar results: the Rijksmuseum and Museum Boijmans-van Beuningen, for instance, have both reduced the number of secure attributions to Rembrandt to about half of those accepted by Rembrandt (Holm Bevers et al., Rembrandt, the Master and his Workshop, Drawings and Etchings, exh. cat. Berlin, 1991, p. 11). In America, the Metropolitan Museum of Art owns nineteen drawings attributed to Rembrandt by Benesch, but now accepts only eleven as secure attributions (Logan in Liedtke et al. 1995 as in note 5 above, pp. 155–156).

Provenance: Edwin Bryant Crocker, Sacramento, by 1871; gift of his widow Margaret to the Museum, 1885