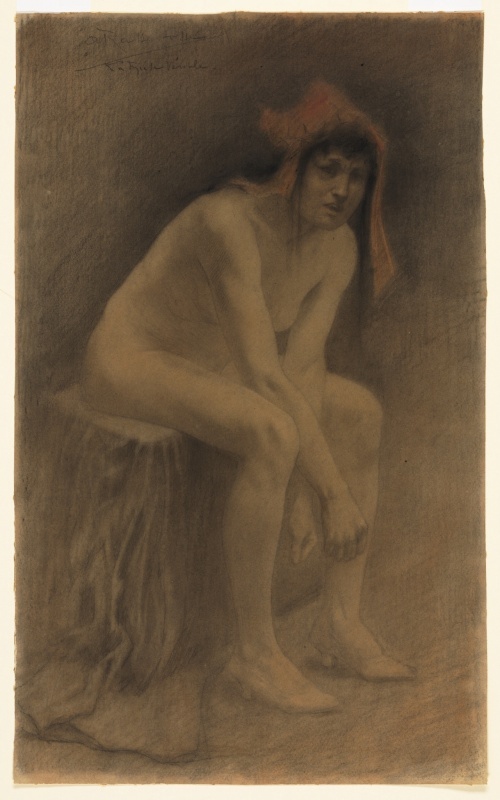 Born in Liège in southern Belgium, Armand Rassenfosse came from a family of art dealers and, at an early age, copied the works of art he saw. An uncle introduced him to the works of the Symbolist artist Félicien Rops, and he became enthralled by the enigmatic, evocative, and often sexually charged imagery. He experimented with printmaking techniques for several years and was encouraged in his efforts by Adrian de Witte, a professor at the Liège academy. Rassenfosse turned to painting in 1884. He became involved in literary circles as well as artistic ones in the 1880s.

A trip to Paris brought him to Félicien Rops’s studio and gave him the confidence to leave his family’s art business and concentrate on his own work. Associated with several presses, he contributed illustrations to many books, including Baudelaire’s Les fleurs du mal in 1901. By the early 1900s, his career was in full flower and he was appointed to the Liège academy. A series of tragedies in his personal life led him to concentrate on brooding, introspective subjects in later years, but his successful career as an illustrator of books continued unabated until his death.

This drawing, dating from 1899, is one of many made in preparation for the grand edition of Baudelaire’s Les fleurs du mal. The text of Baudelaire’s poem La muse vénale describes isolation and hypocrisy of the life of the flesh, which Rassenfosse expresses through the hollow eyes of the desperate woman seen here, her beauty fading into the murkiness beyond.