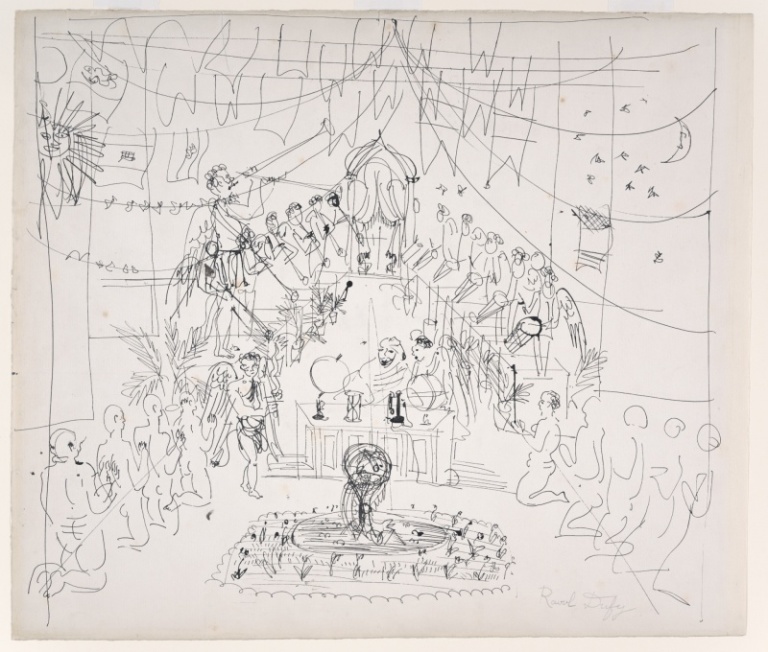 Born in the northern French city of Le Havre, Raoul Dufy first studied at the local art academy in his spare time before entering the École Nationale des Beaux-Arts in Paris on scholarship. There he met the avant-garde gallerist Berthe Weill, who had discovered Picasso and soon showed Dufy’s works as well. Dufy remained at the center of artistic life in Paris, learning from the Fauves, especially Matisse, and exhibiting with other artists from Le Havre. Dufy’s own colorism and style, first influenced heavily by Matisse — he considered the latter’s 1905 Luxe, calme et volupté a revelation — continued to change with the avant-garde until about 1920. His mature style, combining lively line and bold patches of color, celebrates the energy of life.

Starting in about 1910, Dufy collaborated with the fashion designer Paul Poiret. One of the first French fine artists to enter the world of fashion, he provided designs for patterned fabrics until he received an offer from the industrial textile maker Bianchini-Férier. Dufy and Poiret remained friends, and they collaborated periodically in following years. Their worlds connected again in 1920s Paris when the creative edge of high society, fashion, and fine art came together. In this drawing, Dufy depicts a party at Poiret’s studio, with costumed dancers and jazz musicians cavorting under an impromptu tent. The action focuses on an empty doorway, as if a fashion model — or perhaps the host himself — is about to enter.