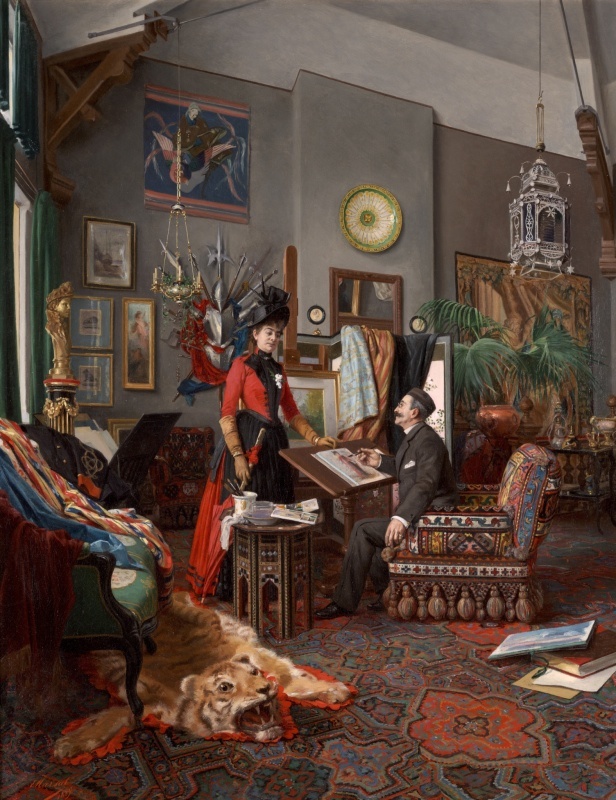 Édouard Marsal was born in Montpellier in southern France. His training under the academic painter Alexandre Cabanel instilled in him a solid painterly technique. He excelled as a painter of history and genre scenes, exhibiting in the Paris Salon for 20 years beginning in 1868. As a professor at the École des Beaux-Arts de Montpellier, Marsal was able to introduce his academic vision to a generation of younger artists. His pride in his region is seen in his work as illustrator of publications from Provence and Languedoc, some written in the native dialect. One of his most famous paintings is the portrait of his patron Alfred Bruyas, a supporter of Cabanel and a fellow Montpellierain, now in the city’s Musée Fabre.

This painting shows the moment when the artist and his sitter end their session. Having broken her pose, she has come to inspect the artist’s sketch. The studio with its neutral walls and north-facing window is bathed in an even light that reflects from the tools and props of history painting: Neoclassical busts, exotic robes and rugs, drawings, and Eastern chandeliers. The red of the rug, robe, and woman’s dress, distributed throughout the room, unify the painting visually.