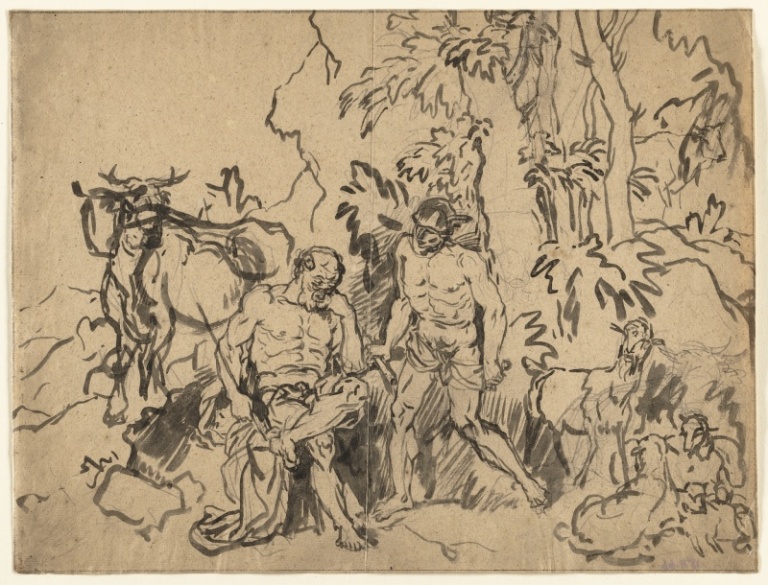 Almost the entire life of the painter and curator Christian Wilhelm Ernst Dietrich was spent at courts in his native city of Weimar and then in Dresden under Augustus the Strong of Saxony. He was most likely trained by his father, a court painter, though his maternal grandfather was also an artist. His sister and nephew became painters as well. At the age of 12, he was apprenticed to the landscapist Johann Alexander Thiele in Dresden.

Dietrich’s talent soon attracted the attention of Augustus the Strong who, along with other nobles, funded his further study. Dietrich spent time in the Netherlands in the 1730s before being appointed court painter for Saxony in 1741. He became adept at reproducing the style of Dutch 17th-century painters as well as developing his own landscape style, for which he became known as the "Raphael of landscape." He traveled to Italy in 1743 and was made professor at the Dresden art academy at its founding in 1764, a post he held until his death. During the later part of his career, Dietrich was also curator of the collection at the Saxon court.

Hermes Stalking Argus shows the attractions of brush drawing. The artist uses a variety of controlled and gestural strokes to capture the musculature of the bodies, inquisitive animal expressions, and the leafy forest beyond. In the story, Jupiter has made Argus guardian of his transformed lover Io, here seen as a cow. Mercury, sent by Juno, lulls him to sleep with his flute and decapitates him with his sword, which he conceals here behind his leg. Dietrich grappled with Io’s placement, depicting her twice in ink, at lower left and upper right, and once in graphite, at lower right.