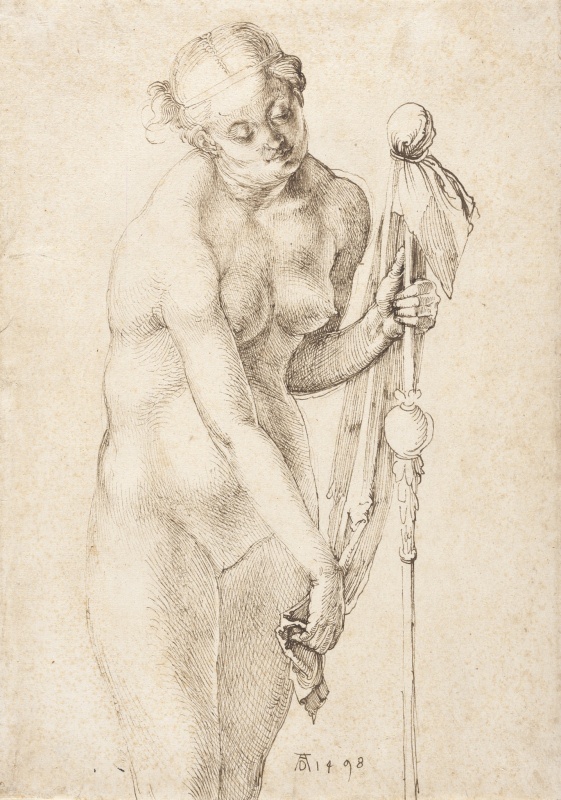 One of the most important painters and printmakers in the history of German art, Albrecht Dürer was born in Nuremberg in 1471. His restless intellect was developed by his training under the painter Michael Wolgemut, who also designed woodcuts for a variety of books, including the Nuremberg Chronicle. By the mid-1490s, Dürer’s desire for knowledge took him to Venice, where he was introduced to Italian painting and ancient sculpture. From this point on, he combined a keen eye for detail and human experience with a new view of man and his ideals, qualities perhaps expressed best in his 1504 engraving of Adam and Eve.

Dürer’s self-portraits and his three famous master engravings of The Knight, Death and the Devil; Saint Jerome in his Study; and Melencolia I, are further expressions of an intellect that produced a revolutionary treatise on human proportion before his death in 1528. The first drawing by Dürer to enter an American collection, the Female Nude with a Staff reflects the concerns of the artist in the years after his return from Italy, where he had been exposed to the nude as a subject in its own right, especially in ancient sculpture. The artist posed his model with a staff similar to the one he had employed in his small engraving of Fortune two years before.