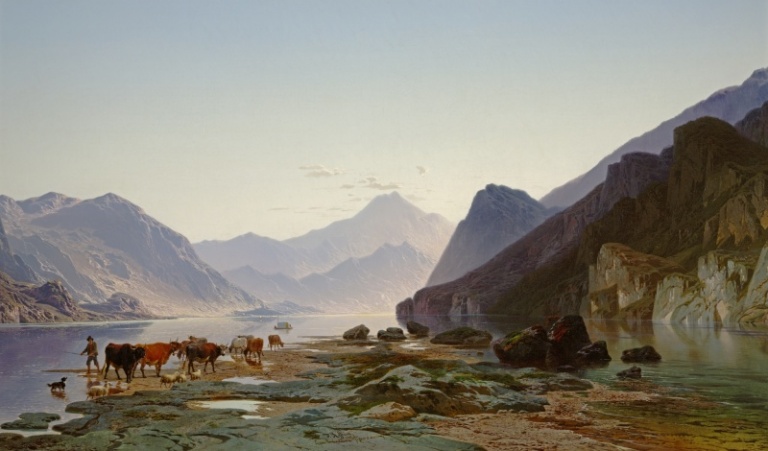 The animal painter Eugène Verboeckhoven initially trained with his father, a sculptor. Living in Ghent from 1815, he attended the academy there until 1818 under the leadership of the sculptor Albert Voituron. His next master, Balthasar-Paul Ommeganck, specialized in painting landscape in the classical tradition. A trip to Germany and the northern Netherlands in 1828 introduced him to the work of the 17th-century animal painter Paulus Potter, which was a great influence upon his later career. He became the director of the Brussels Museum in the early 1830s, and in 1845 he became a teacher at the city’s Royal Art Academy, where he remained for the next 35 years.

Though a talented landscape painter in his own right, here Verboeckhoven created the animals for a luminous, unusual Swiss landscape by his collaborator Jean Roffiaen. Roffiaen studied at the Brussels Academy himself before he moved to Switzerland to work with the famous landscape painter Alexandre Calamé. He made many trips to the Alps in following years, the last in 1879. His interest in the mountains was not limited to their artistic value, since he contributed to the scholarship on natural science as well. This view depicts the promontory dividing Lake Lucerne near the town of Brunnen, with Mount Pilatus in the background. Verboeckhoven and Roffiaen’s collaboration looks back to 17th-century painters in the Netherlands and Flanders, who frequently combined their specialties in the same painting.