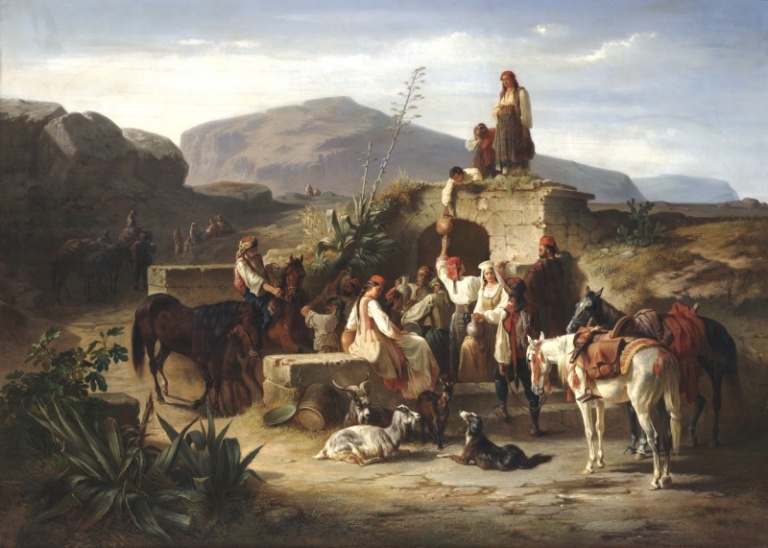 Eugen Adam was born in Munich to a family of skilled painters in 1817. His father, Albrecht, was active at the Bavarian court and provided Eugen and his brothers with early training. Eugen, who was especially interested in the lives of the peoples of eastern and southern Europe, spent nearly five years in intermittent journeys to Hungary, Croatia, and the Dalmatian coast beginning in 1843. An 1848 trip to Italy in the company of his father and brother enabled him to study native costumes and landscapes.

Soon traveling in the company of an Austrian prince, Eugen also witnessed battles in northern Italy, and these became a secondary subject in his later paintings. He returned to settle in Munich in 1853, though he continued to make trips abroad. During the Franco-Prussian war, soon after this canvas was completed, the artist followed the German army into battle and recorded its activities.

By 1869, Adam was devoting himself primarily to military subjects, but here turns to more peaceful peasant life as a memory of his early years. Dalmatia was long considered the easternmost province of Western Europe, combining Mediterranean influences and Slavic language and customs in a land marked by Roman ruins. As such, it was of great interest to painters of exotic lands. The artist carefully recreates the traditional costumes and romantic surroundings, including the agave, figs, and prickly pear commonly grown in the region.