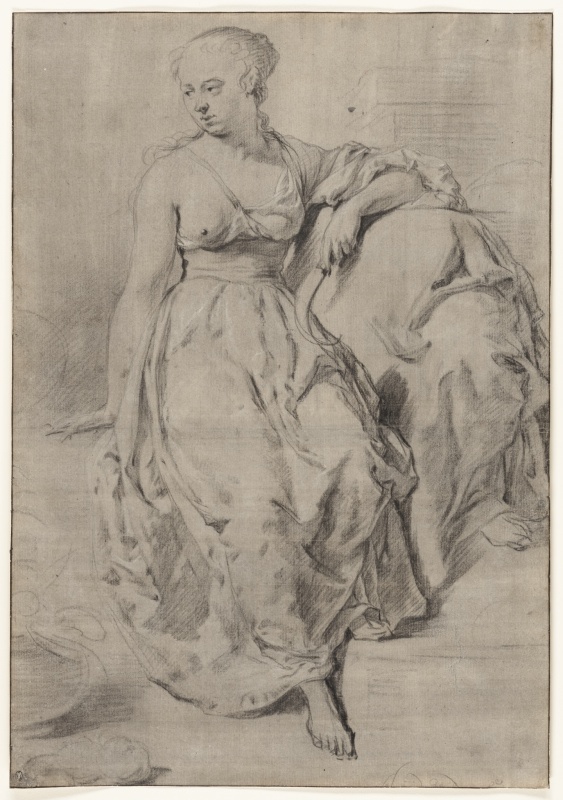 A contemporary of Philips Wouwerman, who may have influenced his art, Adriaen van de Velde was trained as a landscapist under Jan Wynants. Both his father and brother were painters who specialized in marine scenes. His progress in Wynants’s studio soon led the elder artist to hire him to furnish figures for his landscapes. Because of changes in his style and subject matter, it is thought that van de Velde may have traveled to Italy in the early 1650s, though this trip is undocumented. The greater part of his career was spent in Amsterdam where, though he received a few commissions for religious subjects, he concentrated on landscape painting.

A large number of van de Velde’s surviving drawings are of the human figure, often drawn directly from the model, and may have formed a repertory of figure types and poses that he could draw upon. This drawing represents a young woman in the guise of the headstrong agricultural goddess Pomona, a figure van de Velde used in the painting of Vertumnus and Pomona now in Vienna. In the myth, Vertumnus, god of the seasons, disguises himself as an old woman to gain the confidence of the untameable goddess, whom he then seduces. Their union results in the orderly progression from sowing to harvest. In the drawing, the goddess does not reflect the same idealization as in the painting. Rather, she is a goddess at the same time as being a handsome young Dutch woman posing with a garden knife.