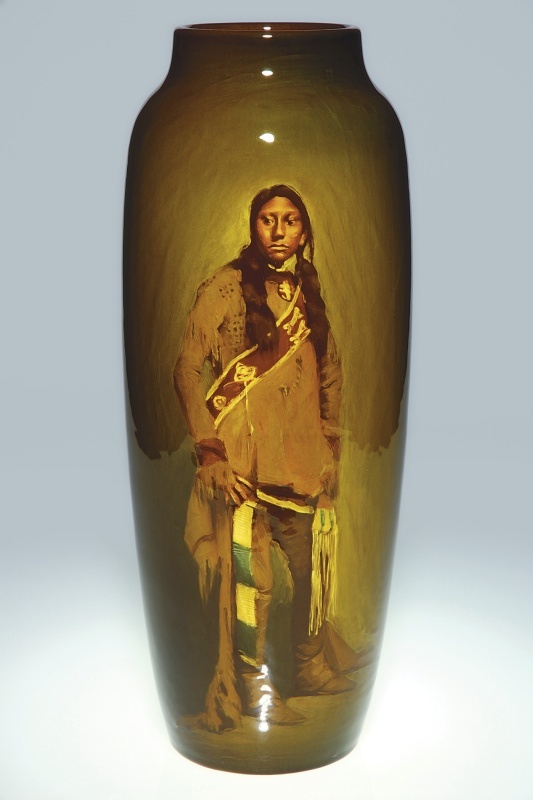 In 1880, Maria Longworth Nichols founded Rookwood, one of America’s most important and productive art potteries. Nichols began as a china painter, but soon expanded to pottery production and hired numerous artisans to work with her. The earliest pieces produced at Rookwood reveal the use of a variety of decorating techniques, but in 1884, artists began blowing colored slips through an atomizer, an early variant of the airbrush. This underglaze, slip-decorated ware was designated Rookwood Standard and characterized works produced at Rookwood during the period between 1884 and the turn of the century.

Rookwood was also well known for its vases and mugs portraying Native Americans. Two of the best decorators in this line of production were Grace Young and Matthew Daly. This vase by Grace Young features a full-length portrait of Suriap, a member of the Ute tribe, which originally occupied a vast territory in Colorado and parts of Utah and northern New Mexico. Ute, which means “land of the sun,” gave the state of Utah its name. The portrait was made from a photograph taken in 1868 by Antonio Zeno Shindler, who worked at the Smithsonian Institution from after the Civil War until the turn of the 20th century. Shindler took the photograph when Suriap was in Washington, D.C., as a delegate.