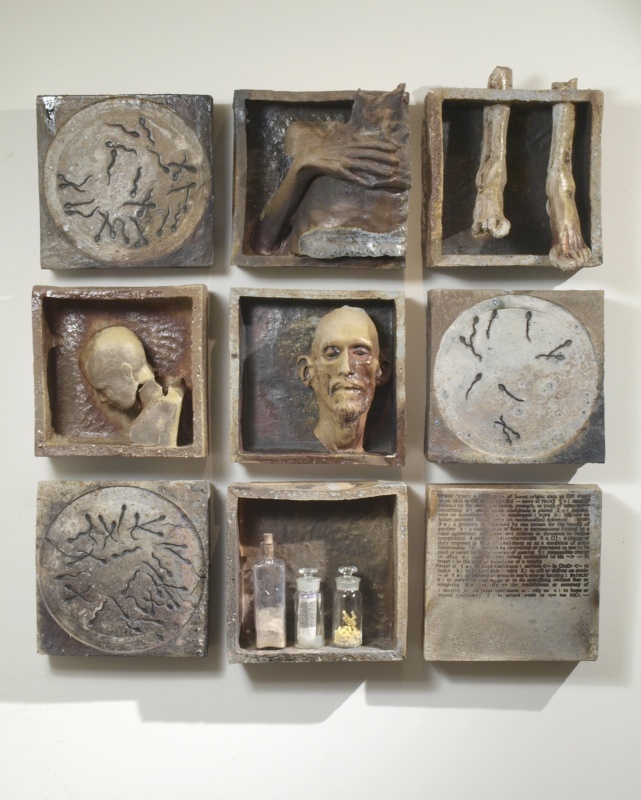 In many ways, Trust is as much a form of self-portraiture as a tribute, in which Carter projects and exorcises his own fears and sorrow. Returning to the Bay Area in 1985, after studying with Ken Ferguson at the Kansas City Art Institute, Richard Carter was met by the AIDS epidemic and experienced overwhelming grief for his friends and contemporaries who were lost. In response, he began a series of elegies in clay entitled Life/Afterlife, which he completed in the 1990s. Trust is one of those works.

At the outset, Carter embedded nails into ceramic slabs to express his pain. These were followed by a series of grid pieces memorializing close friend Troy Burdine. Burdine first approached Carter when he learned he was dying and asked that, upon his passing, Carter cast his body in plaster. Carter could then create from the plaster mold, giving Burdine a measure of immortality and raising AIDS awareness through the unusual nature of a posthumous collaboration.

Burdine died on October 27, 1997, and Carter made the plaster cast the following day. It was neither immediately apparent nor easy for the artist to create an expression worthy of his friend’s memory and many months of meditation went into coping with the loss and visualizing his tribute. A moving series of clay sections arranged into grids evolved over the next two years. Among the motifs featured are casts of Burdine’s head, legs, chest, and hands, evocative of suffering and sacrifice. For the artist, the squares composing the grid are a literal means of intellectualizing and compartmentalizing the emotions he was experiencing. In many ways, Trust is as much a form of self-portraiture as a tribute, in which Carter projects and exorcises his own fears and sorrow.