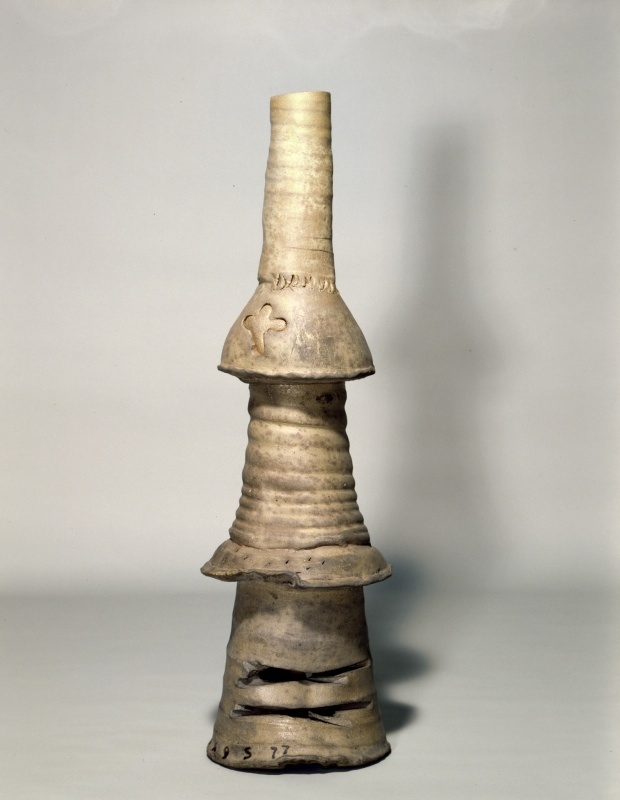 In the mid-1950s, contemporary clay turned on the innovations of Peter Voulkos, who was then teaching at the Otis Art Institute. A sea-shift in the regard for clay occurred after Voulkos began warping oversized, wheel-thrown plates and assembling other thrown forms into substantial sculptural pieces. This was a radical departure from the traditionally intimate scale of handcrafted cups, vases, and other wares.

Voulkos had, in part, assimilated and was responding in his work to the asymmetry and crude handling of the Japanese folk art tradition, Mingei, promulgated in the United States by potters Bernard Leach, Shoji Hamada, and Tatsuzo Shimaoka. However, it was Voulkos’s firsthand exposure to New York School Abstract Expressionist painting at the Los Angeles County Museum of Art in 1956 and 1958 that ignited the revolution. By gouging, tearing, puncturing, and slashing the clay, Voulkos brought to his work in ceramics much of the energy and catharsis of this painting. Doing so opened the field to new and invigorating discourse. His experiments were inspirational to emerging artists, especially in university programs, but challenging to those who prized craftsmanship.

Voulkos’s work remained visually assertive throughout his career, especially in his stacked forms from the 1970s. Generally thrown in three or four separate parts, his vessels, such as the one shown here, tend to be either articulated with tooled lines or the artist’s brute joining of parts. Decoration, however, never altogether vanished from his work, as evidenced by the quatrefoil design, which often appears on his long-necked vases.