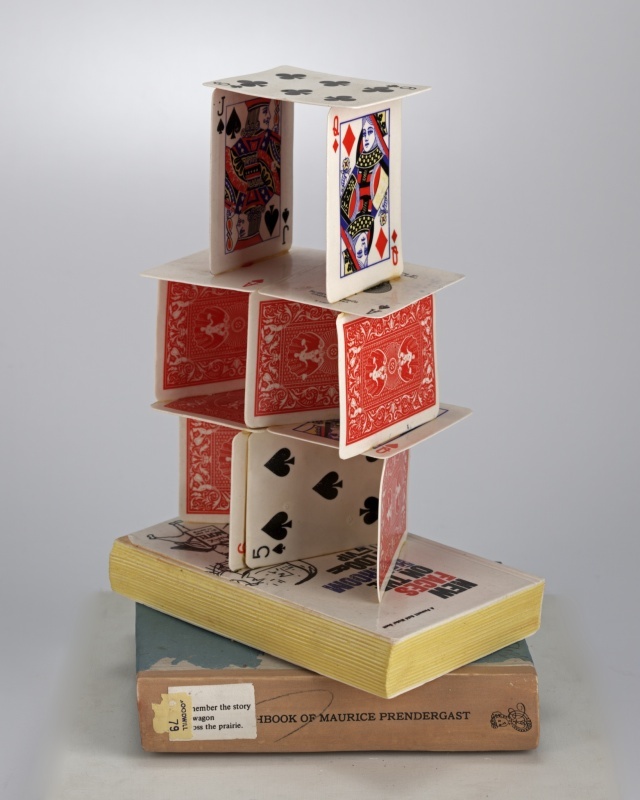 Stack of Cards with Two Books or Virgil Partch and Dick Shaw, 1985.
Richard Shaw (American, born 1941)
Porcelain with decal overglaze, 11 1/2 x 8 x 8 1/2 in. Crocker Art Museum Purchase, in memory of Adileen N. Ford with funds from her family and friends and the National Endowment for the Arts, 1988.7.

Humor and a sophisticated play of form and language mark the Funk aesthetic that originated with Robert Arneson’s ceramic program at the University of California, Davis. Richard Shaw, a student of Arneson’s, particularly reveled in translating verbal clichés into witty visualizations. Like Marilyn Levine, he is known for the exceptional refinement and realism designated by the term Super Object.

Over the decades, the artist has slip cast countless consumer products. Porcelain, with its white body and hardness when fired, serves this type of production especially well. Shaw decorates these with low-fire glazes, china paints, and decals he makes and then transfers onto the clay. His perfection of the decal-transfer technique particularly fools viewers and, to the artist’s delight, even other experienced ceramists. Much of the decoration on this sculpture was completed with decals taken from playing cards and the covers and spines of books.

Shaw has used the verbal trope “a house of cards” frequently in his work, and his conception makes the most of the phrase’s dual meanings. While fixed in place with glue, this porcelain structure of wafer-thin replicas is nonetheless as fragile as any stack of actual cards. The title of this stack references his father, Dick Shaw, a cartoonist and animator, and Virgil Partch, his father’s friend and colleague, a noted New Yorker cartoonist who also authored the 1961 New Faces on the Barroom Floor, depicted here.