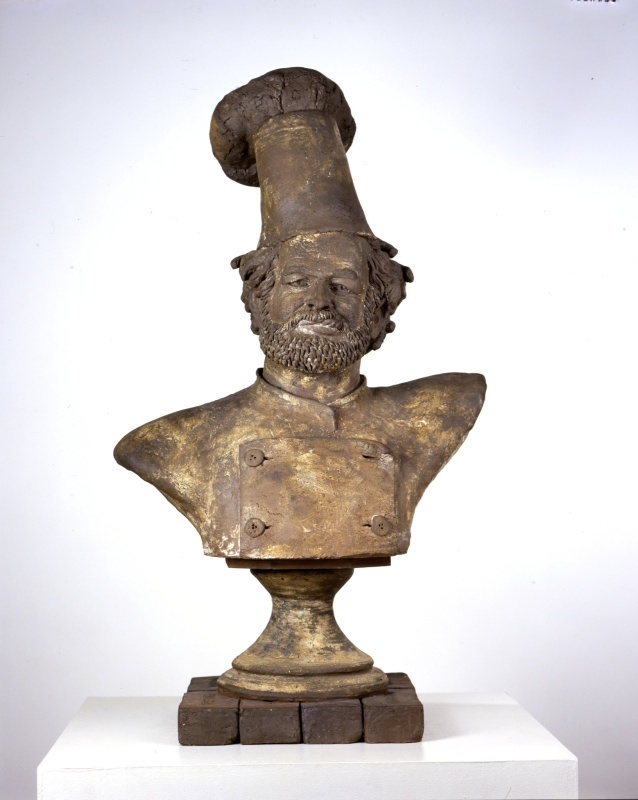 A simple jest at a demonstration booth at the 1961 California State Fair changed the course of Robert Arneson’s ceramics career. With No Deposit, No Return, a depiction of a beer bottle, realistic but clearly handmade, Arneson indulged a whim, but one that sparked a mighty and unfavorable reaction, so much so that it prompted the artist to make a permanent and groundbreaking turn to subject matter.(1) Pop Art soda bottles, a medley of ersatz trophies, and Funk Johns (toilets), clearly set Arneson apart from tradition.

In 1962, Arneson joined the art faculty at the University of California, Davis. He was charged with attracting talented students and succeeded in launching the careers of artists such as David Gilhooly, Richard Shaw, Marilyn Levine, Stephen Kaltenbach, Peter VandenBerge, and Anthony Natsoulas. Arneson’s teaching and high-spirited persona inspired entire generations of young ceramists and, in the process, helped make irreverence and wit acceptable in art. He also promoted the innovative use of painterly color and commercial glazes on white earthenware.

The 1960s proved a pivotal decade for Arneson. Over its course, his subjects became increasingly personal, but also satiric. Among the first to argue that ceramics was not just a craft, he imbued this work with increasingly sophisticated content, which in the early 1970s turned into a series of monumental self-portraits. Humor was of the utmost importance; in these caricatures preposterous expression, either dramatic or comedic, defined the result. The first was the 1971 Smorgi-Bob, The Cook, which he viewed as self-homage.

For Overcooked, the artist puts special emphasis on the goods he bakes by rendering a kiln in back of the bust. Created in terracotta, this is truly a variation of the Smorgi-Bob, but now slightly larger than life size, and named for the golden brown tint the clay acquired when fired. Arneson also nods to art history, with a sly wink to Bernini, the great master of the portrait bust.