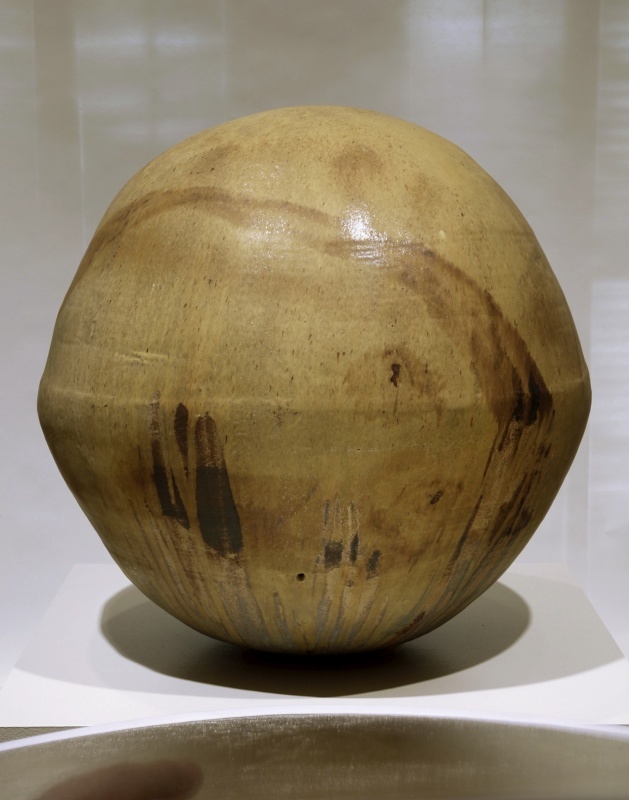 Toshiko Takaezu’s home and studio are filled with a diversity of vessels from all periods of her distinguished career. She has salt-glazed her works in the past, but she also wood fires ceramics in the Japanese anagama tradition, using a long, one-chambered kiln built by hand. In 2007, the artist made an extraordinary gift of more than forty individual works to the Crocker Art Museum, including the three vessels shown here. Takaezu, who grew up in Hawaii as one of eleven children in a Japanese-speaking family, began potting in 1948. In 1951, she enrolled at the Cranbrook Academy of Art in Michigan, where she studied with and assisted Maija Grotell, one of the Academy’s most influential instructors. Among Takaezu’s revolutionary developments is the intentional closing of the vessel form to eliminate its function as a container. Conceptually, this creative turn successfully made the unseen interior space all the more present. The work becomes the canvas on which she drips or pours glaze and applies gestural strokes of pigment by brush. Nature, whether in her vegetable garden or in Hawaii’s volcanic parks, has always been Takaezu’s inspiration for such forms, as has the restraint and sense of interconnectedness at the core of her personality. “In my life I see no difference between making pots, cooking, and growing vegetables. They are all so related. However, there is a need for me to work in clay. It is so gratifying and I get so much joy from it, and it gives me many answers in my life.”1 In the large, almost sphere of Yellow Moon, carefully layered clay coils fully enclose the inner hollow. The artist then smoothed and softly paddled the clay by hand to round its shape. Such “moons” are clearly sculptural and inspire meditations on the landscape and the diversity of nature.