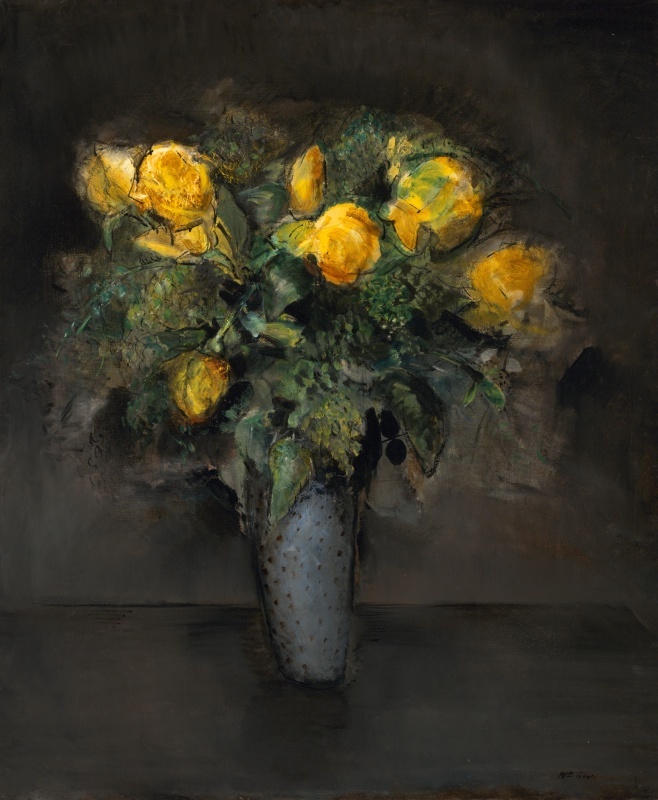 San Francisco native William Alexander Gaw came to art through his father, Hugh Gaw, a watercolorist. He moved with his family to Berkeley in his youth, attended Berkeley public schools, and studied privately with artist James Martin Griffin. In 1908, he enrolled at the San Francisco Institute of Art and four years later showed his first paintings at the San Francisco Art Association annual exhibition.

Beginning in 1915, Gaw worked as a draftsman in a San Francisco engineering office, but he spent most of his career in Berkeley. He painted landscapes drawn from his surroundings and also still lifes, many of which depicted the flowers he cultivated. He exhibited Yellow Roses at multiple venues beginning in 1934; in 1936 the painting won the First Award at the San Francisco Art Association’s 56th Annual. Paintings such as this one led a critic to call him the American Odilon Redon, after the French Symbolist painter of still lifes.(1)

Although Gaw generally painted in a highly simplified, representational style, he also experimented with Cubism and Post-Impressionism. He was very interested in the science of color, and his paintings often incorporate bright, complementary hues. Gaw lectured on color to his many students over the course of his long and influential teaching career. He taught at the California School of Fine Arts in the 1930s; then, in the 1940s and 1950s, served as Chairman of the Art department at Mills College in Oakland.