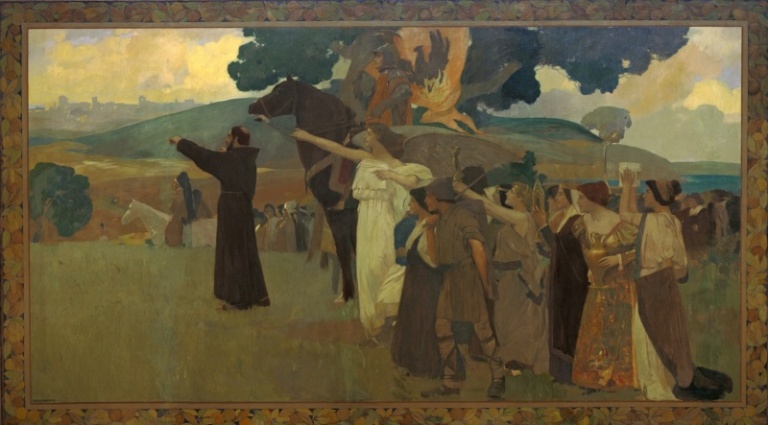 Arthur Mathews was a painter, muralist, illustrator, architect, teacher, publisher, and craftsman. Along with his wife, Lucia, who was also an artist, he is credited today with creating the California Decorative style, which in painting and furniture combined elements of European Art Nouveau, classical antiquity, and California trees, flowers, and locales.

After the earthquake and fire of 1906 destroyed the school and ended his teaching career, Mathews teamed up with John Zeile, a local businessman and art patron, to establish the Furniture Shop. Under the artistic direction of Mathews and Lucia, the shop produced carved and painted furniture, picture frames, and other decorative pieces. Mathews also edited a magazine, Philopolis, devoted to the artistic aspects of the rebuilding of San Francisco.

As a painter, Mathews became known for classically inspired figures portrayed in the California landscape. Many of his murals are allegorical in nature and steeped in antiquity, while others depict events of local history. Vision of Saint Francis incorporates both. Its primary subject is St. Francis, here dressed in the robes of a Franciscan padre and gazing toward what would one day be the city of San Francisco. The painted border of fruit and foliage, in emulation of a frame, was likely painted by Lucia. Originally commissioned by the Savings Union Bank in San Francisco in 1911, the monumental work drew “great crowds of spectators” to Mathews’s studio. A San Francisco reviewer described the accomplishment:

The painting, ‘Saint Francis,’ would seem to be an artistic interpretation of, 'Westward, the course of empire takes its march.' In the foreground appears the great concourse of the ages; here a puritan of simple habiliments, there a courtier of a gone by day, here an Indian aborigine, there a knight in quest of glory, while leading them all is the brown clad figure of the great Saint, his arms uplifted toward the distant goal, the promised, 'city beautiful.' (1)