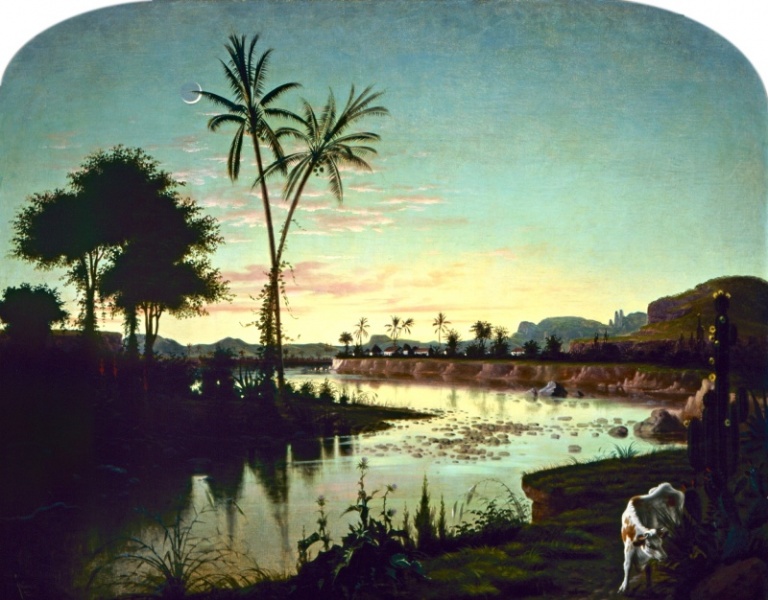 Fortunato Arriola was born and raised in Sinaloa, Mexico. He was well versed in the classics, learned several languages, and taught himself to paint. He arrived in San Francisco in 1857, where his first landscape — a tropical sunset — sold for the respectable sum of $400. He also painted portraits. Critics were especially enthusiastic about Arriola’s ability to capture the luminous glow of sunlight and moonlight. Although he painted views of California, this light most often permeated tropical scenes of Mexico and Central America that he rendered both from sketches and memory. Their exotic details were popular in San Francisco during the late 1860s, appealing to those who had encountered Panama and Nicaragua en route to California. East Coast painter Frederic Edwin Church’s striking views of South America also influenced these depictions.

An active and popular member of San Francisco’s growing art community, as an artist and art teacher Arriola nevertheless had trouble supporting his twelve children and left for New York in 1871. Although he exhibited at the National Academy of Design, he did not achieve the financial success that he had hoped for in the East and decided to return to California. He drowned at sea when the ship he was on caught fire. San Francisco’s premier artists and galleries donated paintings to benefit his survivors.