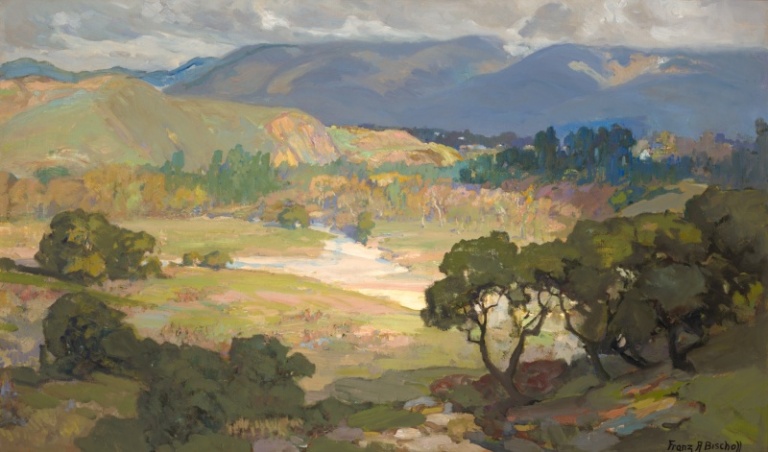 Well known in the American East for his exquisite porcelains profusely decorated with roses, Austrian-born Franz Bischoff built a home and studio in the Arroyo Seco area of Pasadena in 1908. There, he planted flowers, which provided models for his china painting and also the new oils that increasingly occupied his attention. This focus was perfectly in keeping with his new environment, and his paintings served to communicate the essence of the Los Angeles region, and Pasadena in particular.

Bischoff began his china-painting career as an apprentice in Bavaria. At 18, he went to Vienna where he pursued additional training in painting, design, and ceramic decoration. He arrived in New York in August 1885 and took a job as a decorator in a china factory. He also worked in Pittsburgh, Pennsylvania; New Bedford, Massachusetts; and Fostoria, Ohio, where on May 24, 1890, he married.

Bischoff then accepted an invitation to join the china painting studio of Mary Leicester Wagner, and he and his new wife relocated to Detroit, Michigan. Shortly thereafter, he moved to nearby Dearborn, where he taught china decorating and watercolor painting and produced elaborately painted porcelains. Formulating and manufacturing many of his own colors, he won numerous awards and earned a reputation as the King of the Rose Painters.

Bischoff and his family moved to Southern California in 1906. Influenced by his surroundings and by local artists, he turned to easel paintings, embracing the light and color of Impressionism. Without the space limitations imposed by porcelain, he had free reign to create elaborate floral still lifes and sweeping landscape views of Southern California’s coast, colorful canyons, and deserts. These paintings were often deeply personal, depicting his garden, the Pasadena region, and sometimes his family.