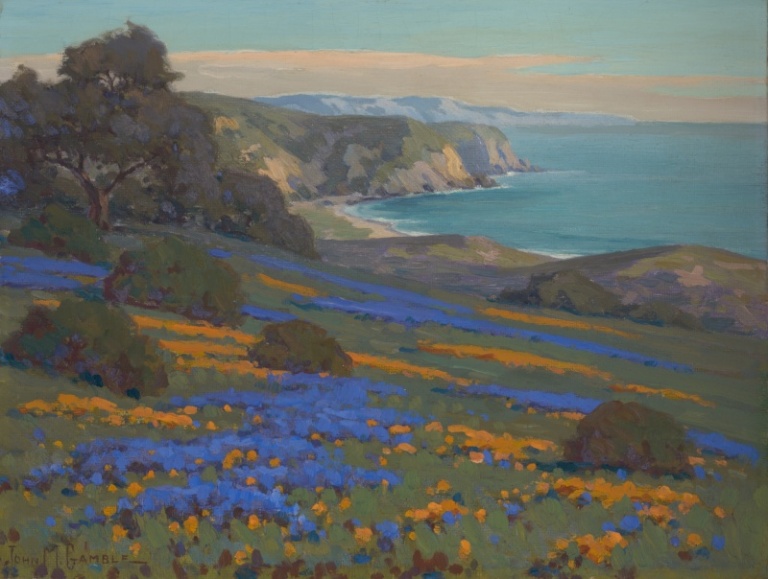 A leading California Impressionist, John Marshall Gamble acquired a national reputation as a painter of California meadows and hillsides laden with wildflowers. Born in Morristown, New Jersey, he spent his teenage years in New Zealand. He came to San Francisco at age 20 to study art at the California School of Design, first under Virgil Williams and then Emil Carlsen. He continued his training in Paris at the Académie Julian under academicians Jean-Paul Laurens and Jean-Joseph Benjamin-Constant.

Gamble returned to San Francisco in 1893, but when his studio was destroyed in the 1906 San Francisco earthquake and fire, he moved to Santa Barbara. In both locales, he rendered the state’s poppies, lupine, buckwheat, and ceanothus — often in combinations of complementary hues. Of these, the golden poppy, adopted as the state flower in 1903, was his favorite, as it seemed to evoke California’s color, youthful energy, and promise.

This coastal view depicts poppies and lupine at Goleta Point near Santa Barbara. Many of Gamble’s paintings depict the Santa Barbara region where, by the 1920s, he had achieved success and earned the appellation Dean of Santa Barbara Artists. In 1929, he joined the faculty of the Santa Barbara School of the Arts, teaching drawing and landscape painting. Failing eyesight slowed his painting in later years. He died at the age of 93.