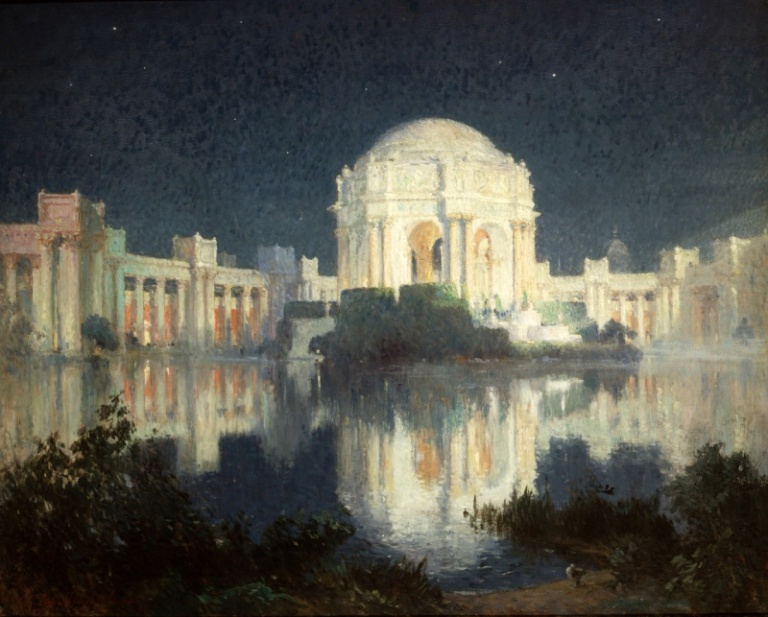 Designed by architect Bernard Maybeck, the Palace of Fine Arts was one of the most distinctive buildings of San Francisco’s 1915 Panama-Pacific International Exposition. The exposition featured the greatest assemblage of art yet shown in the city and included hundreds of examples of Impressionism, Post-Impressionism, and other progressive styles. Colin Campbell Cooper, then nearly 60, had long embraced Impressionism, having been influenced by Childe Hassam in New York in the early 1890s. In this painting, he applies the color and brushwork of Impressionism to a nocturnal depiction of Maybeck’s building under a sky shimmering with stars.

A native of Philadelphia, Cooper first studied with artist Thomas Eakins. In 1886, he went to Europe for further training, studying in Paris at the Académies Julian, Delecluse, and Viti. He returned to Philadelphia in 1895 and taught at the Drexel Institute until 1898, when he moved to New York City and painted the city’s new skyscrapers. He was elected an associate member of the National Academy of Design in 1908 and achieved full Academician status in 1912.

Cooper made his first trip to California to visit the Panama-Pacific International Exposition in San Francisco, where his work was being exhibited, and then spent the winter of 1915–16 in Los Angeles. Even after moving to California in 1921, he continued to maintain a New York residence, but he spent most of his time in Santa Barbara, where he became a leading member of the community and Dean of the Santa Barbara School for the Arts. He maintained a home in Santa Barbara until his death.