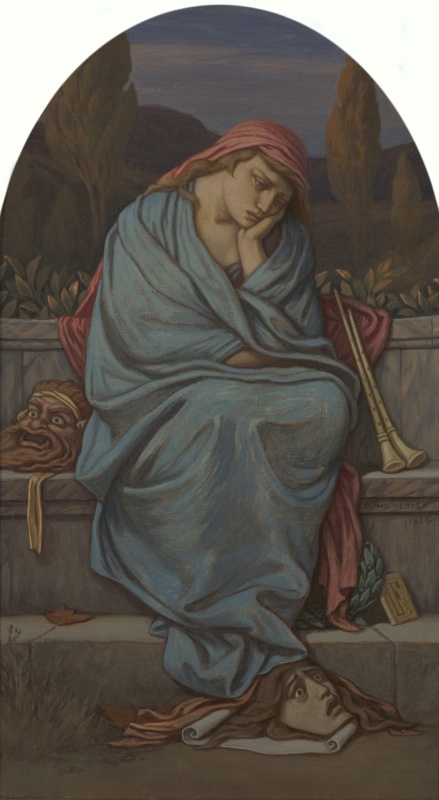 Elihu Vedder was a leading American symbolist painter, illustrator, and designer. Born in New York City, he spent his youth in Schenectady, New York. He studied under Tompkins Harrison Matteson in Shelbourne, New York, and, in 1856, went to Paris where he spent eight months in the studio of François-Edouard Picot. He then traveled to Florence and studied drawing with Raffaello Bonaiuti. It was in Florence that Vedder became interested in Renaissance art and acquired a mastery of the human figure.

Vedder returned to New York City in 1860 and began painting and working as an illustrator. His enigmatic paintings such as The Questioner of the Sphinx, The Lair of the Sea Serpent, and The Lost Mind led to his membership in the National Academy of Design at age 29. At the end of the Civil War, he left the United States to live in Italy and married an American student there in 1866. He had a home in Rome and — after the financial success of his 1884 illustrations for The Rubaiyat of Omar Khayyam — on the Isle of Capri. From Italy, he traveled widely, visiting the United States and England. In England, he came to admire the dreamy, figurative paintings of Dante Gabriel Rossetti and other members of the Pre-Raphaelite movement and became a friend of painter Simeon Solomon. He was also influenced by the mystical works of William Blake and William Butler Yeats.

This painting depicts Melpomene, a songstress and the muse of tragedy who inspired the poetry of sorrow and grief. She is shown here with her traditional symbol, the tragedy mask of theater, at her feet.