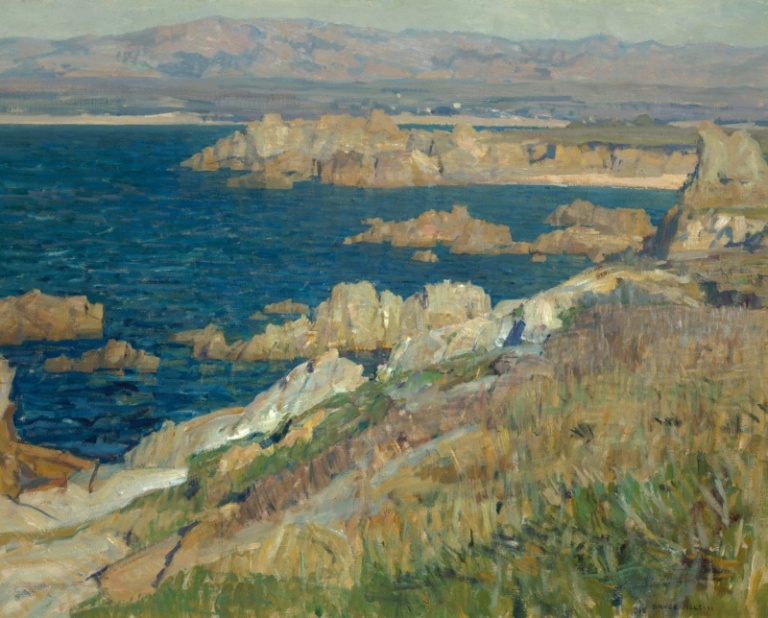 A native Californian, (Ernest) Bruce Nelson began studying engineering and architecture at Stanford University before switching to the art department and studying under Professor Robert Harshe. He then left for New York City and studied at the Art Students League and at a summer school founded by Birge Harrison in Woodstock. Travel in London and Paris allowed him the opportunity to feverishly absorb “the big thoughts of the big people whose work was then before the public — the first showing of the avowed moderns.”(1)

Armed with new skills, Nelson returned home to the Santa Clara Valley and began painting arboreal landscapes near Stanford University. After graduating with a degree in graphic arts from Stanford in 1913, he established a studio in Pacific Grove, where he began painting views of the shoreline, such as this depiction of Monterey Bay near Lovers Point. Because Californians had not yet been fully introduced to the modern styles that would be presented in great numbers at the 1915 Panama-Pacific International Exposition in San Francisco, Nelson’s early paintings were considered very progressive. “His work is big and broad, breathing the freedom of the open country,” critic Laura Bride Powers explained. “His conceptions are clear and his stroke sure. He is, if we must so classify him, a modernist.”(2)

Nelson himself won a silver medal at the Exposition. Until early 1918, he continued to paint and exhibit and then enlisted in the Army Air Service and moved to Columbus, Ohio. Following his service, he settled in New York, where he spent the rest of his life and career. When he returned to visit San Francisco in 1923, he exhibited paintings that now included white winter scenes of the East, which contrasted greatly with his sparkling images of California’s blue waters.