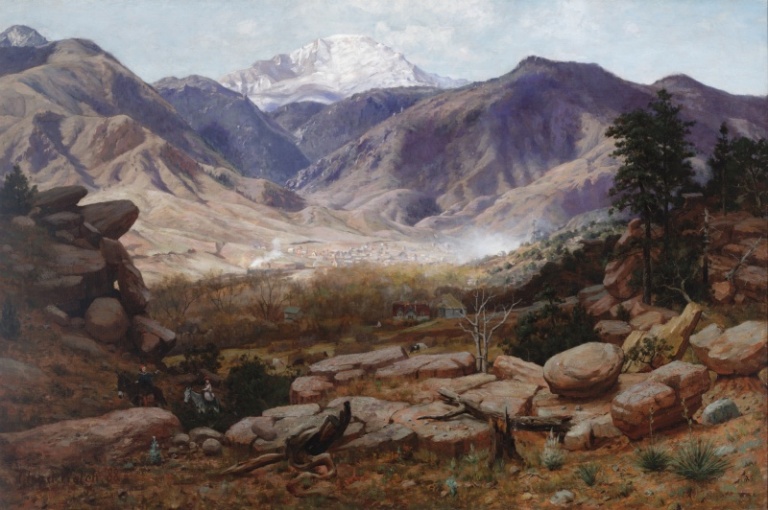 Thaddeus Welch was born in La Porte, Indiana, and raised near Portland, Oregon. He worked as a printer until 1866, when he moved to California and settled first in Dixon and then San Francisco. There he worked as a typesetter and began formal art instruction with Virgil Williams at the California School of Design. His apprenticeship to artist J. W. Ogilvy introduced him to a patroness who financed his European training.

In Munich, Welch enrolled at the Royal Academy and developed close friendships with the important circle of American artists there. He spent nearly four years in Paris before returning to the United States in 1881. Over the next decade, he painted in the Hudson River Valley, Boston, Philadelphia, Chicago, and Australia and became known for his work on cycloramas, large paintings that were presented as a form of popular entertainment. In 1887, he worked in Chicago painting an enormous cyclorama and traveled to Sydney, Australia, painting this depiction of Manitou Springs on his way. Located near Colorado Springs and the famed Garden of the Gods, Manitou Springs was incorporated in 1870 and boasted luxurious hotels. These amenities and the region’s well-publicized healing waters attracted thousands of tourists.

In 1893, Welch returned to California with his artist wife, Ludmilla. After a year in Pasadena, the couple settled in the San Geronimo Valley of Marin County. There they painted Mount Tamalpais and surrounding hillsides and valleys, often with cattle, until moving to Santa Barbara in 1905.