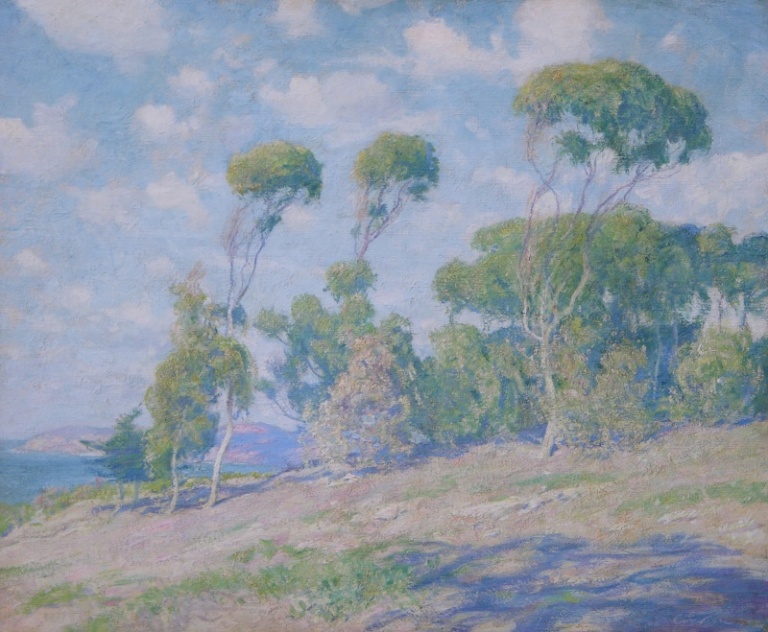 The son of a California senator, Guy Rose was born in San Gabriel and ultimately became the Golden State’s foremost Impressionist. His childhood interest in sketching eventually led him to study at the California School of Design in San Francisco. In 1888, he went to Paris for further study at the Académie Julian, and also attended anatomy lectures at the École des Beaux-Arts and won a scholarship at the Académie Delacluse.

Rose spent the second half of 1890 in Giverny, where, with fellow Californians Mary Brady, Evelyn McCormick, Eric Pape, and Ernest Peixotto, he gained firsthand exposure to Impressionism through proximity to Monet’s famous studio. A second stay in Giverny in the summer of 1891 confirmed his affection for the area, but he nevertheless returned to the United States and settled in New York City, working there as an illustrator while continuing to paint and exhibit.

Rose reconnected with Giverny in 1899 and five years later purchased a cottage there. He stayed until late 1912, during which time Monet became his mentor and influenced his paint application, approach to color, and lightness of touch. After returning to the United States, Rose worked and taught in New York and Rhode Island before moving home to Southern California in 1914. Shoreline scenes immediately became the artist’s preferred subject matter, and he depicted the southern and central coast’s regional diversity in a French Impressionist style. In 1915 and 1916, Rose visited the seaside communities of Laguna Beach and La Jolla. In order to fully capture the crystalline light, airy sky, and eucalyptus trees shown in this depiction of Laguna, he likely worked directly from nature, setting up his easel near the Pacific under the purple shadows of an unseen tree.