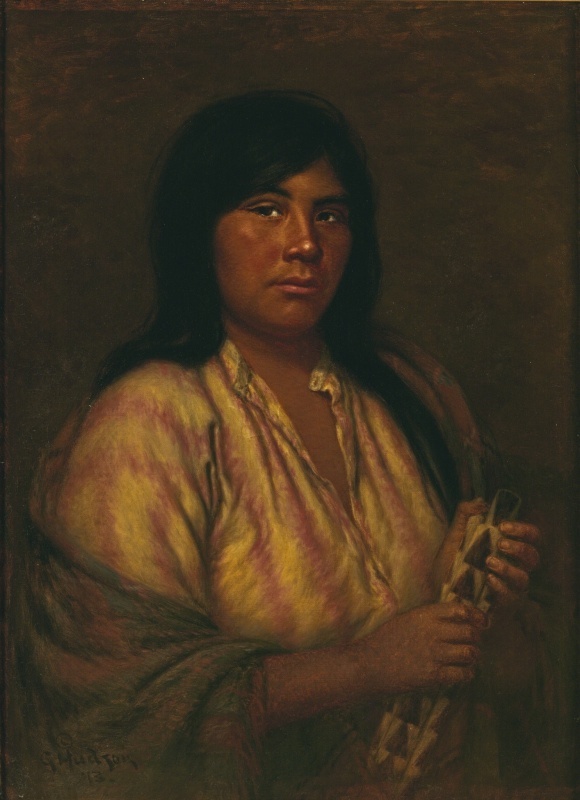 Raised in Potter Valley near Ukiah, California, Grace Carpenter Hudson was an acclaimed painter of Native American subjects, especially the Pomo Indians of coastal and inland Northern California. After attending public schools in Ukiah and San Francisco, she enrolled in San Francisco’s California School of Design as a teenager, studying there for five terms with Virgil Williams, Raymond Yelland, and others.

In 1890, the artist married John Hudson, a physician for the San Francisco and North Pacific Railroad Company, who quit practicing medicine in order to research the Pomo Indians and follow his interests in archeology and ethnography. With her husband, she returned to Ukiah and became known to locals as the Painter Lady.

Hudson achieved a national reputation during her lifetime. She produced her first important work, National Thorn, which depicted a sleeping Pomo baby in a cradle basket, in 1891. Two years later, she painted a crying Pomo infant, a work she called Little Mendocino. The popularity of the second painting in particular, which was exhibited at the 1893 World’s Columbian Exposition in Chicago and at the 1894 California Midwinter International Exposition in San Francisco’s Golden Gate Park, confirmed her reputation and direction.

This painting is a bit unusual for Hudson in that it depicts a young woman, rather than a child. The title of the painting is derived from the name of a game Pomo women played with gambling staves, which this woman holds in her hands. By the time of Hudson’s death in 1937, she had completed over 684 numbered oil paintings, most depicting the Pomo people.