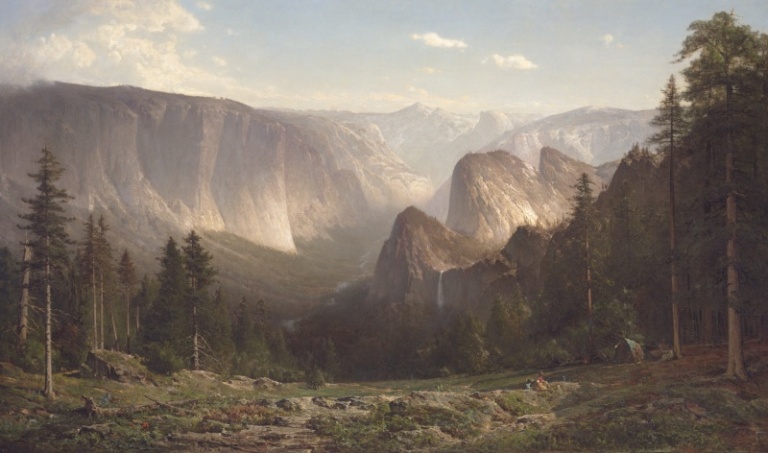 Born in Birmingham, England, Thomas Hill came to the United States as a youth, following his father to Massachusetts in 1844. He worked briefly in a cotton factory, became an apprentice to a carriage painter, and later joined an interior decorating firm in Boston. He moved to Philadelphia in 1853 to study art, enrolling in night classes at the Pennsylvania Academy of Fine Arts. A year later he visited the White Mountains of New Hampshire, a region associated with painters of the Hudson River School. He departed for California in 1861, at the outset of the Civil War.

Hill made his first sketching trip to the Sierra in 1865. He exhibited his oil painting Sugar Loaf Peak, El Dorado County (Crocker Art Museum, E.B. Crocker Collection, 1872.529) in San Francisco that same year. It was the first major work that the Crockers purchased from a contemporary Californian artist.

Hill would ultimately make the Yosemite Valley his signature subject. He made his first documented trip there with photographer Carleton Watkins and painter Virgil Williams in August 1865.(1) The following spring, he exhibited a view of the Yosemite Valley in New York at the National Academy. The depiction was immediately compared to the grandiose landscapes then being exhibited by Albert Bierstadt.

After Hill traveled to France in 1866 and became acquainted with the Barbizon style, he brought a new expressive and painterly quality to the foliage of his Sierra and Yosemite subjects. This French influence can be seen in the foreground of Great Canyon of the Sierra, Yosemite, the second of two 6-by-10-foot exhibition paintings that the artist created of Yosemite Valley from Inspiration Point. Even though Hill produced it from sketches and from Carleton Watkins’s photographs, critics lauded the painting’s truthfulness to nature at its unveiling in Hill’s Boston studio. The artist then sent the work to New York for exhibition, where it won the Palette Club’s bronze medal. He also arranged for its presentation in San Francisco, where it was displayed in its current Snow and Roos walnut frame under gas lighting.

The Crockers purportedly committed to purchase the monumental painting for $10,000 even before its San Francisco presentation.