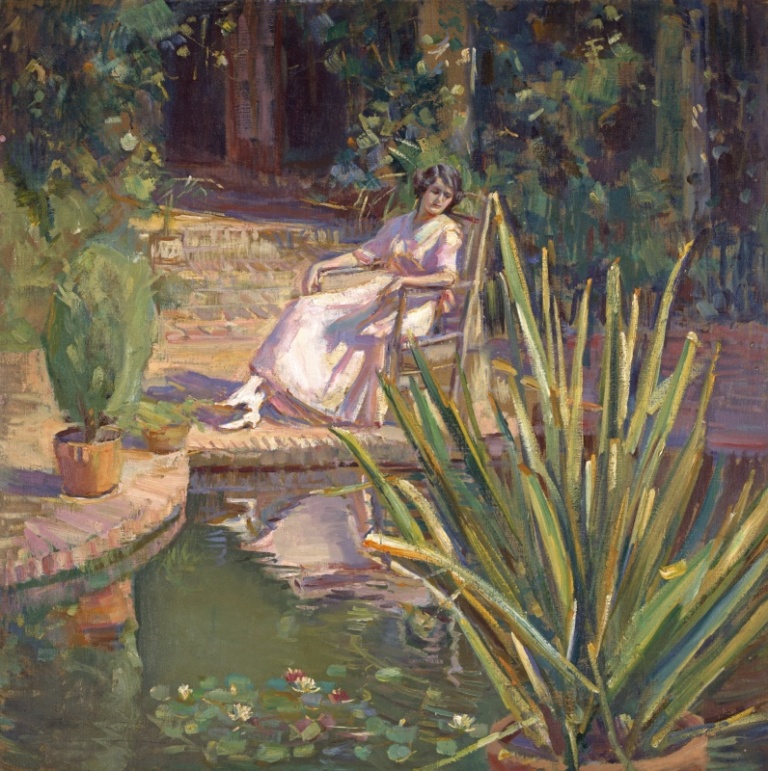 Born to wealthy parents in Milwaukee, Wisconsin, Donna Schuster began her art training at the Art Institute of Chicago and graduated with honors. She continued her studies at the school of the Museum of Fine Arts in Boston under Edmund Tarbell and Frank Benson, and then participated in William Merritt Chase’s 1912 painting tour of Belgium and in his 1914 summer school at Carmel-by-the-Sea, California. Chase urged his students to vary their paint handling, to work outdoors in natural light, and to work quickly.

Schuster was greatly influenced by Chase’s teachings, and by the lessons of Benson and Tarbell, all of whom were known for rendering elegant female subjects both in and out of doors. The influence of their airy depictions of women posed in white dresses is clearly apparent in this work. Following her summer class in Carmel, Schuster went to San Francisco and produced a series of award-winning watercolors depicting the construction of the Panama-Pacific International Exposition. She then returned to Los Angeles, where she had established a studio. In 1923, she built a home overlooking Griffith Park and later purchased a small house in Laguna Beach.

An active member of the Southern California art community, Schuster participated in various arts organizations and helped found the Women Painters of the West. In the 1920s and 1930s, she taught at the Otis Art Institute. Her acquaintance with the region’s other progressive artists ultimately led her to become more abstract and experimental in her depictions of people, still lifes, city scenes, coastal views, and landscapes.