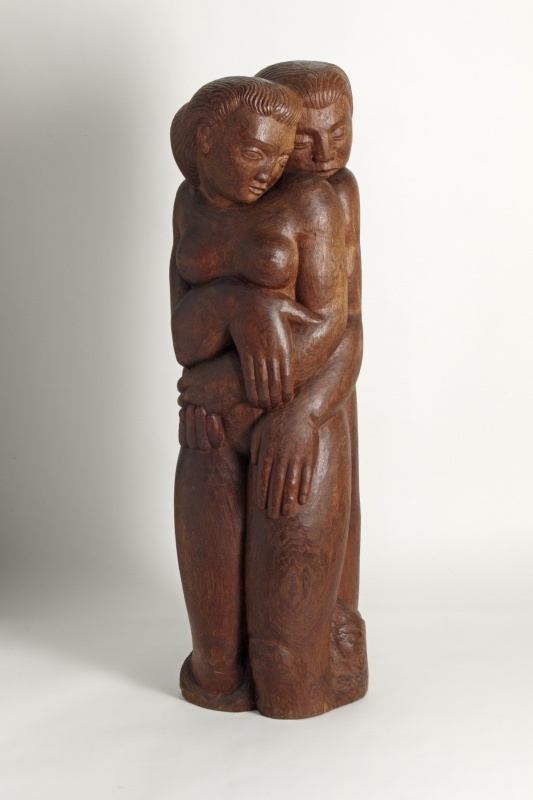 In 1924, Brents Carlton left Arkansas to study at the California School of Fine Arts in San Francisco. He then continued his training in New York at the Art Students League, at the same time working as a pharmacy assistant. He returned to San Francisco in 1929, first establishing a studio and then receiving a pharmacy license, supporting himself for the rest of his life.

Although he initially intended to become a painter, Carlton quickly discovered a talent for sculpting and worked in clay, bronze, stone, and exotic woods. Influenced by French sculptor Aristide Maillol, as well as by the simplified, streamlined forms of Art Deco, he became best known for creating poignantly posed, stocky figures and for maximizing the expressive potential of his medium. For his efforts, he won awards at San Francisco Art Association Annual exhibits and gained distinction at Bay Area museums. He also exhibited in New York.

In 1937, Carlton moved his studio to Montgomery Street to fulfill commissions for the 1939–40 Golden Gate International Exposition to be held on San Francisco’s Treasure Island. Working with architect Timothy Pfleuger, he created two monumental Polynesian figures for the Court of Pacifica, as well as two eighteen-foot sculptural reliefs. Such large scale commissions were rare for the artist, as most of his works were smaller, such as this one, and suitable for display in the home. Yet even these pieces had great presence, prompting San Francisco Chronicle critic Alfred Frankenstein to write that “there is nothing small about the range of his expressive gifts and nothing small either about the range of his technical adroitness and his mastery of materials.”(1)