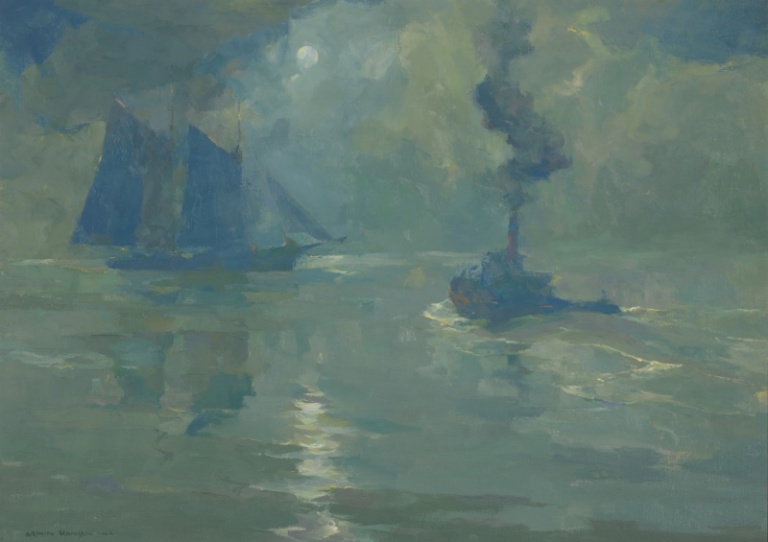 San Francisco native Armin Hansen was a painter, etcher, teacher, and National Academician (1). He was first trained by his father, Herman Wendelborg Hansen, and then began formal study at 17 under Arthur Mathews at the Mark Hopkins Institute of Art in San Francisco. After three years, he went to Europe, studying in the ateliers and art galleries of Munich and Nuremberg. While in Nuremberg, he was impressed by a painting by Carlos Grethe, whose colorful maritime scenes prompted Hansen to seek his instruction at the Royal Academy in Stuttgart.

Hansen left Stuttgart in July 1908 and traveled first to Paris and then to Nieuwpoort, off the Belgian coast. For the next four years, he was a crew member on a trawler and sailed the North Sea. He also continued to paint, specializing in marines of the North Sea and fisher folk.

With 100 new canvases, he returned to San Francisco in 1912. Shortly thereafter, Hansen moved to Monterey where, after some additional traveling, he decided to settle. Although the calm, nocturnal setting of Drifting Fog is unusual for Hansen, the iconography of boats off the Monterey shore is one of his signature subjects. The painting parallels closely in subject and date a poem entitled “Boats in a Fog,” written by Robinson Jeffers, the Monterey Peninsula’s premier poet. Hansen certainly knew the poet, and his poetry

Out of the mystery, shadows, fishing-boats, trailing each

Following the cliff for guidance,

Holding a difficult path between the peril of the sea-fog

And the foam on the shore granite.

One by one, trailing their leader, six crept by me,

Out of the vapor and into it,

The throb of their engines subdued by the fog, patient and

Coasting all round the peninsula