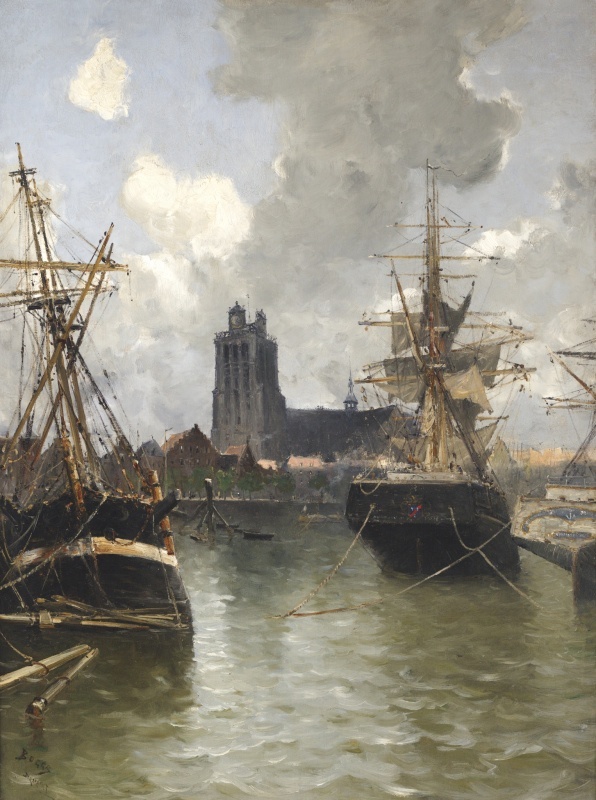 Frank Myers Boggs was born in Ohio and raised in New York City, where he began his career as an engraver for Harper's magazine. He went to Paris in 1876 and studied at the École des Beaux-Arts with Jean Léon Gérôme, who encouraged him to practice landscape painting rather than figure painting in the academic tradition. Two years later he returned to New York City and set up a studio on Shelter Island. After his first inclusion in the Paris Salon in 1880, he pursued his career in Europe while continuing to seek recognition in the United States by sending paintings to New York, Boston, and Chicago for exhibition and sale.

Although acquainted with Dutch artist Johan Barthold Jongkind, as well as French artists Claude Monet, Pierre Auguste Renoir, and Alfred Sisley, Boggs did not take up the broken brushwork of the Impressionists in capturing the heavy atmosphere of Northern Europe. He painted this view of Dordrecht harbor in the Netherlands after he settled in Europe permanently. A subject popularized by 17th and 18th-century Dutch painters, the harbor is dominated in Boggs’s conception by the Dordrecht Cathedral.