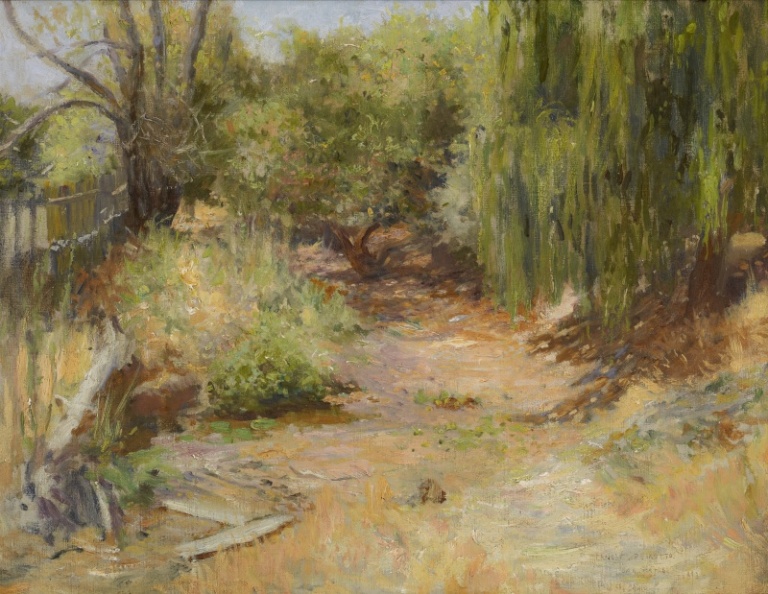 Ernest Peixotto’s frequent travels and international ties made him one of California’s most cosmopolitan artists. Born and raised in San Francisco, he began his art training at the California School of Design in 1886, studying for two years under Emil Carlsen and Amédée Joullin. He then traveled to Paris for further training at the Académie Julian under the academicians Jean-Joseph Benjamin-Constant, Jules Lefebvre, and Jean-Paul Laurens. Beginning in 1889, he made the first of many trips to Giverny, France, where he was “strongly impressed by the impressionist method.”(1)

After his work was accepted into the 1890 and 1891 Paris Salons, Peixotto returned to San Francisco. There, he worked as a book illustrator while applying the Impressionist skills he had learned in France to landscape views of the Bay Area, such as this scene of San Rafael, and Monterey. He shared his techniques with students when he taught briefly at the Mark Hopkins Institute of Art. He returned to Europe after exhibiting at San Francisco’s 1894 California Midwinter International Exposition and won an honorable mention at the Paris Salon of 1895.

Peixotto was back in San Francisco later that year and became a contributor to The Lark, a witty “magazinelet” that ran monthly for two years. He left California again in 1897. From this point on, he split his career between New York City and France, where he maintained a villa at Fontainebleau. In New York, he became a top book and magazine illustrator and painted portraits and landscapes. He also painted murals, returning several times to California to fulfill commissions.