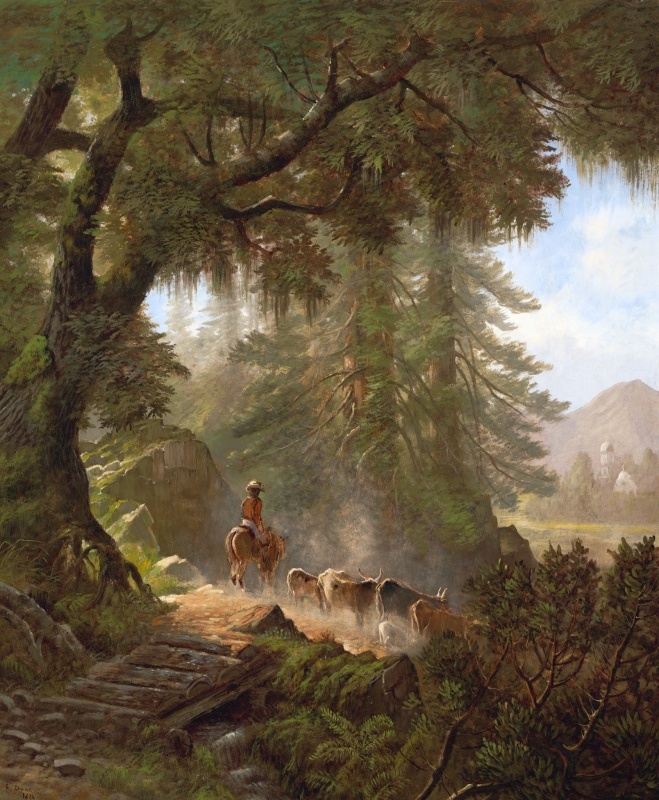 Edwin Deakin’s paintings represent an aesthetic evolution in California art, a shift from the sublime to the picturesque. Before Deakin, most Northern California landscapists aimed for grandeur and drama, depicting sites such as Yosemite and the Sierra as a glorious, expansive paradise. Deakin moved away from a boldly panoramic depiction of nature to a more intimate view. His early paintings include scenes of California’s architecture and wilderness, European subjects drawn from his excursions in 1877 and 1888, and San Francisco’s Chinatown. He also produced still lifes of fruit, flowers, and other decorative objects.

The third of seven children, Deakin was born in Sheffield, England. In 1850, the Deakins moved to Wolverhampton, and Edwin became an apprentice at an establishment specializing in furniture laquerwork. Except for this experience, and private study from books and gallery visits, he remained largely self-taught.

Deakin first came to San Francisco in 1870. In 1875, he shared a studio with still-life painter Samuel Marsden Brookes, who exerted an influence on Deakin’s paintings of fruit set against stone walls and more elaborate still-life compositions.

Ultimately, Deakin’s paintings of the 21 California missions would be recognized as his crowning achievement. Overall, he produced three complete series of mission “portraits,” along with many stand-alone compositions. As a series, the missions occupied his primary attention between 1897 and 1899, though he had painted missions since his first arrival in California and continued to depict them until the end of his life, aiming to record these historically important structures before they deteriorated further or fell into complete ruin.