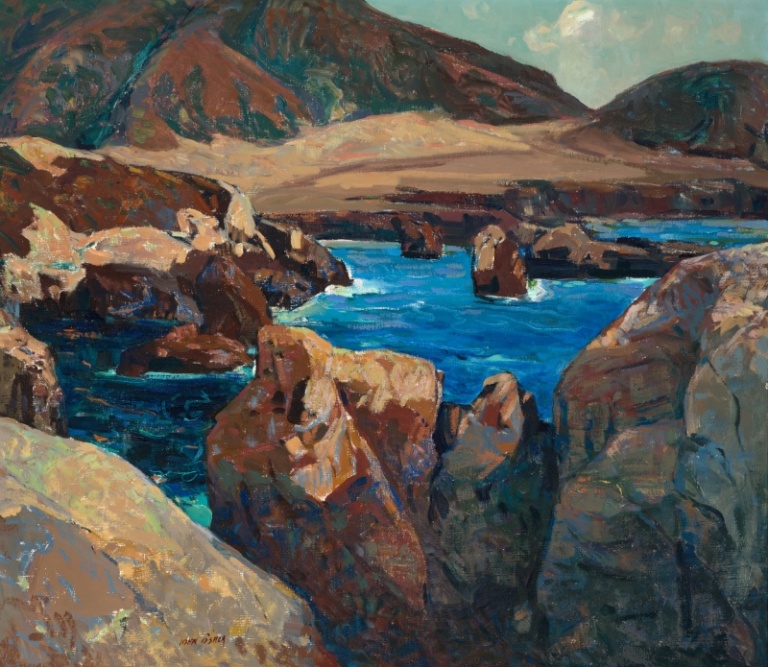 Born in Ballintaylor, Ireland, John O’Shea was a figurative and landscape painter known for his bold and colorful work. His powerful interpretations of the landscape, particularly those depicting locales around his Monterey Peninsula home, brought a new sense of modernism to the region’s long tradition of landscape painting.

In his teens, O’Shea immigrated to New York City, where he studied at the Adelphi Academy and the Art Students League. In 1913, he moved to Pasadena, California, and began painting “impressionistic pictures of Southern California” filled with “vibrating light and color.”(1) He lived briefly in Laguna Beach in 1916, but then moved permanently to the Monterey Peninsula. In the 1930s, he served as both Director and President of the Carmel Art Association.

O’Shea built a large home in the Carmel Highlands. His fellow painters Theodore Criley and William Ritschel also had homes there, and in their company he painted views from the rocky coast. In addition to these scenes, he produced portraits, still lifes, and, occasionally, abstractions. He also traveled widely, painting in the South Pacific, Mexico, and American Southwest. In 1938 or 1939, he moved from the Carmel Highlands to Pebble Beach, but he ultimately settled in Carmel-by-the-Sea.