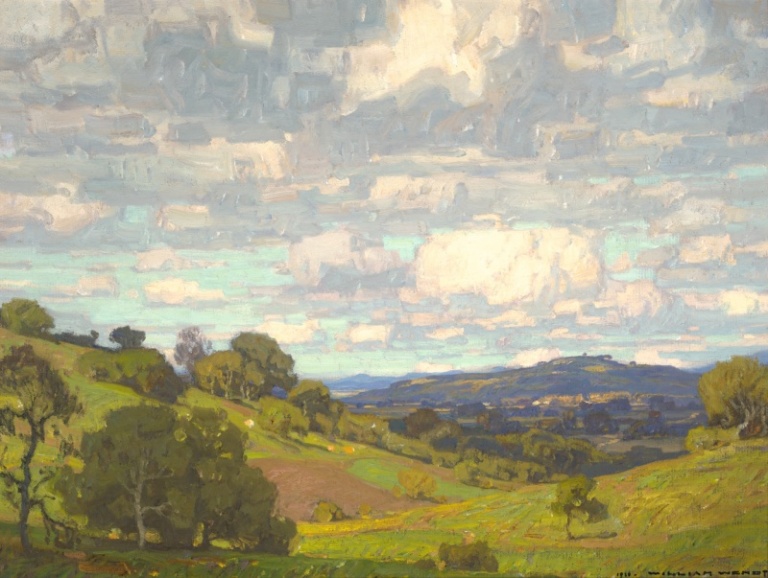 William Wendt was born in Germany and came to the United States in 1880 as a teenager. He first settled in Chicago and worked as a commercial artist and then pursued formal training at the Bromley School of Art and the Art Institute of Chicago. In 1894, his final year at the Art Institute, he made his first trip to California with fellow artist George Gardner Symons. Subsequent visits prompted him to move to Los Angeles in 1906 with his new wife, sculptor Julia Bracken Wendt. In 1918, he built a second home and studio in Laguna Beach, where he spent much of the rest of his life.

Wendt came to be known as the Dean of Southern California artists. He helped found the California Art Club in 1910 and became its first president the following year. In 1912, he was elected an Associate Member of the National Academy of Design in New York. Later in the decade, he became a member of the newly formed Laguna Beach Art Association and the Ten Painters’ Club of California.

Best known for his California landscapes, Wendt found inspiration in the trees, hills, streams, and skies that he often painted on the spot. Although his earliest paintings emphasized the transient light and color of the Impressionists, this more lyrical style gave way to one of greater power, breadth, and abstract patterning. This painting in particular shows the artist making this transition, combining a naturalistic handling of the landscape with abundant, abstracted clouds. Reviewer Antony Anderson noted the possible influence of Cubism, asking “Has the lesson of the cubists been conned by William Wendt? . . . I saw — or thought I saw — cubic signs in the shape of his clouds and the modeling of his live oaks.”(1)