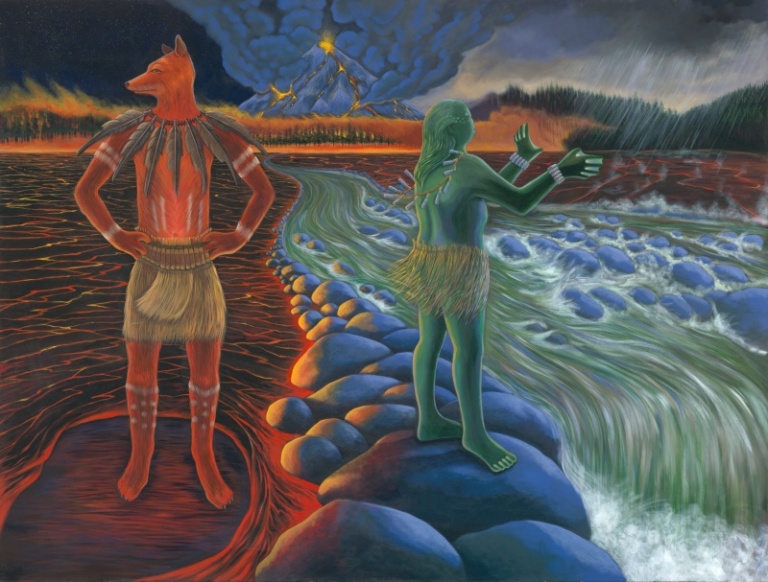 Many of Judith Lowry’s subjects are deeply personal, relating family triumphs and tragedies. She also seeks to record and recover the oral and musical traditions with which she was raised. These traditions came from her father’s mixed Maidu and Washoe heritage, which he learned from his grandmother, who, in turn, had learned from her own grandmother.

In Welgatim's Song, Lowry portrays the Native California story of inundation. The protagonist is Welgatim, wife of the mythical coyote Weh-pom. Weh-pom has fallen in love with the beautiful deer Suh-Mim and so plots to murder his wife. Each morning, Welgatim reappears unharmed and makes breakfast for her husband. She warns him of terrible consequences, but Weh-pom will not be dissuaded from his plots. The next morning he awakens to an empty home and when he sets out to hunt finds all the light and heat extinguished. Using song and prayer, Welgatim has summoned all the clouds and rain to the earth as punishment. The story continues with the tale of The Race for Fire and the hazardous trek to distant Mount Tehama (foreshadowed by its depiction in the background here) to retrieve fire in order to save all of Earth’s inhabitants. The artist unites both the deluge narrative and the volcanic destruction of Mount Tehama in order to speak directly to our contemporary environmental crisis.