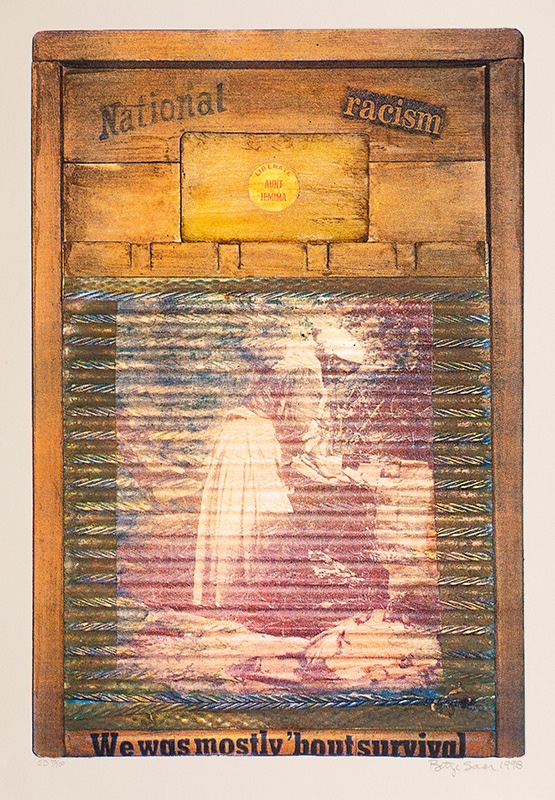 In this print Betye Saar calls out racism and stereotypes through text and imagery. She depicts a Black domestic worker wearing a stereotypical household slave/servant uniform, complete with an apron. The serigraph, or silk screen, is made to look like a wooden washboard, upon which clothes are scrubbed. This laborious method of washing is typically associated with the late 19th and early 20th centuries. Surrounding the image are three phrases, “National racism” at the top of the washboard, “Liberate Aunt Jemima” at the center, and “We was mostly ‘bout survival” at the bottom. Aunt Jemima is based on the stereotype of a mammy but is a figure used by Saar to represent empowerment. This print is a commentary on women’s roles, division of labor, and social class based on race.

In the 1970s, Saar emerged as part of the Black Arts Movement and remains best known for her collage and assemblage works. Raised in Los Angeles, she worked as an interior designer in the 1950s and shifted to printmaking a decade later. After the Watts Rebellion, commonly known as the Watts Riots, and assassination of Martin Luther King Jr. in the 1960s, she began to create assemblage pieces that referenced politics, racism and racist symbols, technology, and memory. She uses her trove of collected/found objects to make works of art infused with stories that have personal meaning or that reimagine racist memorabilia into symbols of empowerment.