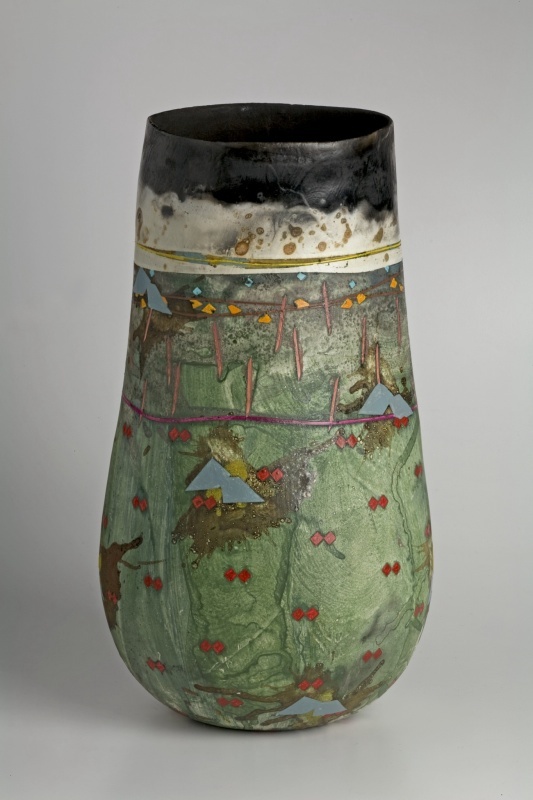 Figurative ceramics increasingly dominated the work of emerging artists, but by the 1980s, it was apparent that a plurality of expression was emerging. Stimulated by recent scholarship on styles and movements in ceramics, many artists working in clay were eager to move beyond the reductive, minimal styles of vessel production associated with Modernism, and to explore the power of decoration. Another important influence on this return to motif was the 1970s Pattern and Decoration movement, which began with contemporary painting.

Artists like Bennett Bean began to emphasize pattern, color, and surface, as much as the vessel forms they created. A vessel such as this one is exceedingly complicated in its decoration. From forming to burnishing, firing, painting, partially glazing, and pit-firing — to create the smoky black effect at the rim — Bean’s entire process for one such vase might require as many as 20 steps from start to finish. By 1982, the date of this vessel, Bean was using acrylic paint and the narrowest graphic tape possible to render the red lines, diamonds, and blue trapezoids, which finish the overall design. As a general rule, only unglazed areas, left by a wax resist, are painted. This does not hold, however, if more is needed to fully articulate the play between organic and geometric elements. The artist says, “I’m not making pieces about use, volume, tactility, narrative. My pieces since 1980 are specifically about decorated surfaces outside and space inside.” (1)