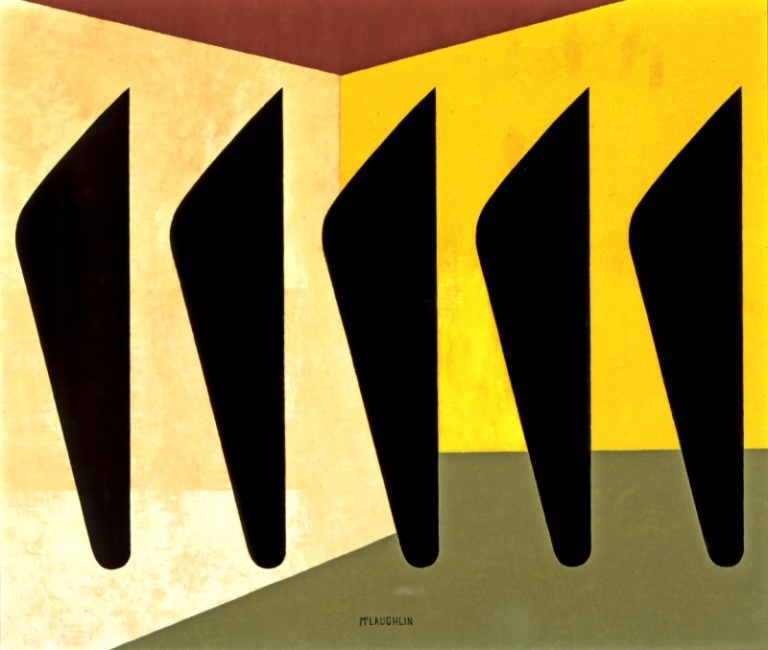 Few artists were as influential to the development of contemporary art in Southern California as John McLaughlin and the other three artists featured in the 1959 exhibition "Four Abstract Classicists: Karl Benjamin, Lorser Feitelson, and Frederick Hammersley". Organized by the Los Angeles County Museum of Art, the exhibition spawned the term Hard-Edge Painting and gave birth to the cool, highly finished L.A. Look.

McLaughlin was a self-taught artist and an accomplished individual who led an adventurous life until he settled with his wife in Dana Point, California, in 1946. There, he painted seven hours a day, seven days a week, pushing his artistic development. In his experimental works from 1946 to 1949, McLaughlin looked to European Modernists, especially Kazimir Malevich and Piet Mondrian.

This painting is an early example prefiguring McLaughlin's mature geometric style, which was fully evident by 1953. As with other early works, McLaughlin carefully lettered and prominently placed his signature, but he soon stopped doing so, taking, he said considerable pains to efface his identity in his later work. Always aware of the contemporary art scene, he took pride in his detachment from Abstract Expressionism's “immediate problems of the painter”, preferring his own analytical approach.(1)