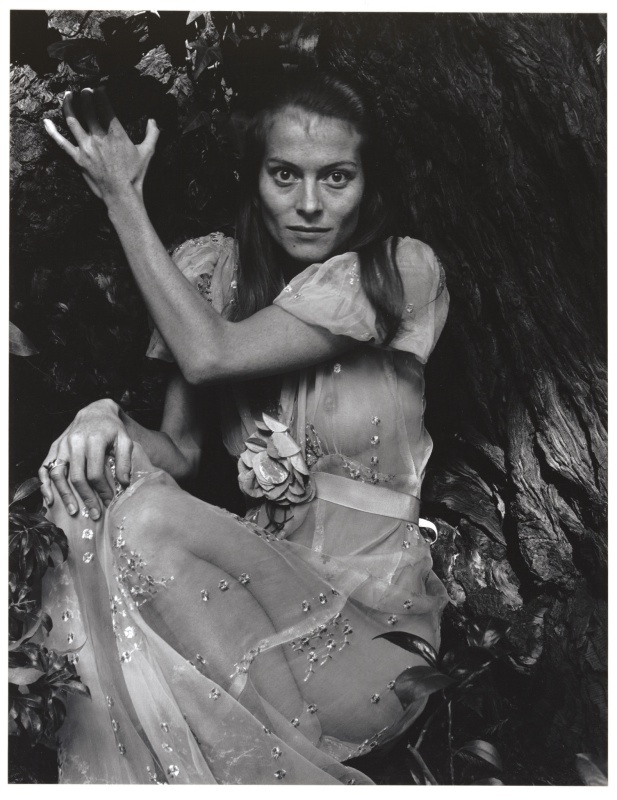 Photographers Ruth Bernhard and Imogen Cunningham addressed the female nude as an instrument for the study of light. Although an admirer of Cunningham, Judy Dater was nevertheless self-conscious in her own early approach to the female body. Her first work with the nude came from photographing alongside her teacher and husband, Jack Welpott. In 1969, the two undertook a portraiture project, their subjects all women, most young and from San Francisco. Exhibited in 1972 and 1973 in San Francisco and New York, the work clearly revealed a bifurcation of vision. Critics took note that Dater had photographed believable personas and in some instances made jest of male prurience. This was an important and timely departure from longstanding photographic conventions regarding the female form.

Famous among Dater’s portraits of the era are two compositions featuring Twinka Thiebaud, actress, model, and daughter of artist Wayne Thiebaud. In this remarkable portrait, Thiebaud performs for the camera, becoming a nymph whose youth and vitality breathe through her diaphanous gown. This was a genuine and desirable motivation as Dater tended to regard the act of picture-making as the creation of a fiction of the self, encouraging it as an experience to be shared by both the subject and photographer. This portrait precedes Dater’s well-known mercurial image of the 91-year-old Cunningham and the lithe and youthful Twinka taken in Yosemite in 1974.