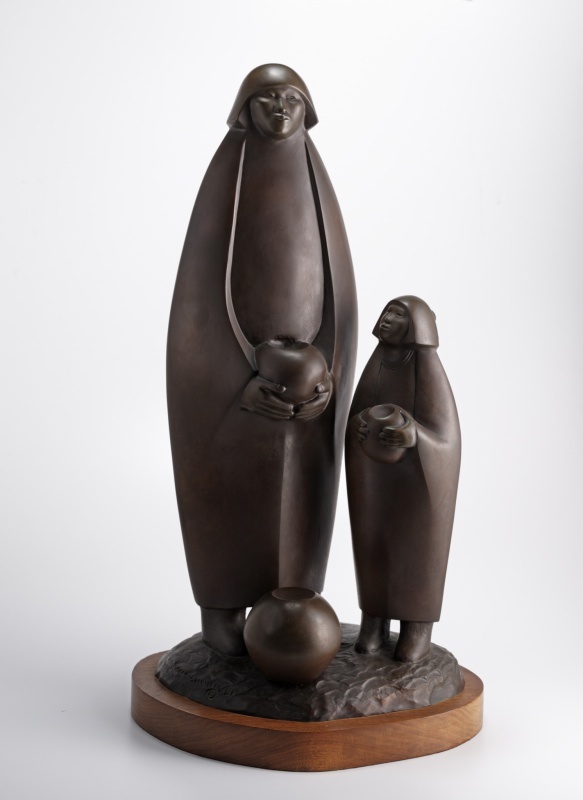 Allan Houser began his career as a painting student at the Santa Fe Indian School in 1934, where educator Dorothy Dunn had established the studio fine arts program in 1932. During her five years there, Dunn was influential to artists such as Houser, who later went on to successful and noted careers. While her ideas about primitivism and Native American art are regarded as somewhat specious today, her methods did aim to foster an appreciation of traditional motifs and methods. Houser, however, soon rejected the flat manner in which studio students were encouraged to paint, and by the 1960s focused on three-dimensional work created in a variety of media, ranging from stone to cast bronze. As a faculty member at Santa Fe’s Institute of American Indian Arts, Houser, along with fellow instructor, Fritz Scholder, influenced an entire generation of emerging artists to unabashedly explore themes of identity and cultural isolation in their work, a significant development in contemporary Native American art.

Houser’s production drew upon his engagement with 20th-century Modernists Constantin Brancusi, Jean Arp, and Henry Moore. Seeking a spare and essentialist vocabulary, he developed his own reductive approach to the figure, emphasizing balanced forms and fine modeling. At times, the results were almost entirely abstract, while other pieces were more illustrative. His subjects most often drew from the stories and activities of Native American life and culture, which he imbues with an enduring solidity.