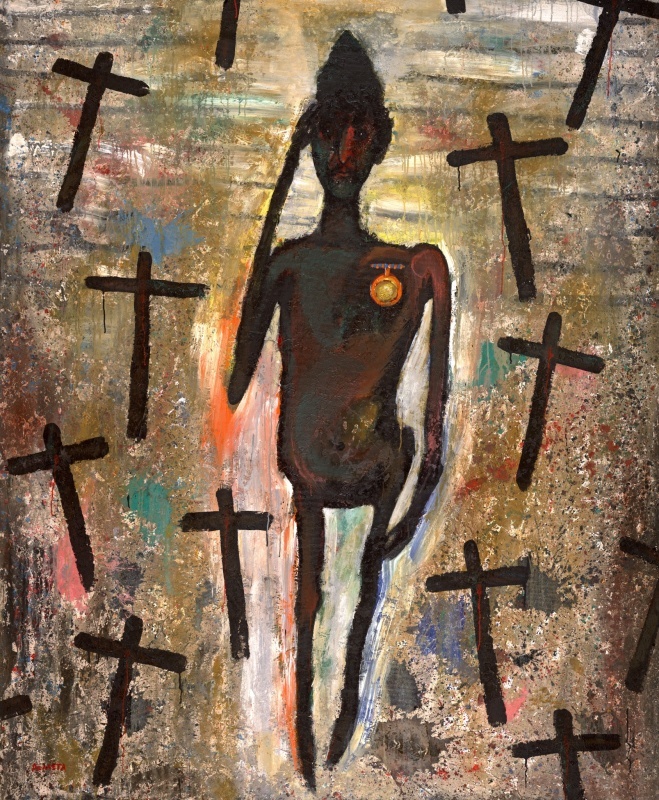 During the 1980s, Luis Cruz Azaceta often painted self portraits in various guises. Many, as in this instance, featured the artist frontal and centered within the compositional field. With vigorous paint handling, he distorted himself into “a goblin with large eyes and a hooked nose” that turned the specific into a universal symbol of pain and suffering.(1) Moved and haunted by the jeopardies of contemporary life, Azaceta engaged with the social issues that marked the decade, especially homelessness, the AIDS epidemic, urban violence, and the more personal cause of Cuban immigration, which was suspended for the first time ever in 1985.

Azaceta believed that art could create awareness and engender empathy. The pain and suffering of individuals concerned him more than most, in part because of his personal history. Born in Cuba, he witnessed the violence of revolution firsthand and, after Castro’s ascension, immigrated to the United States. Azaceta was 18 years old and found himself the ward of relatives in New Jersey; in 1966, he moved to New York City. In art, he found a means to negotiate the anxiety, fear, and isolation he experienced as an exile living in the inner city. During the 1980s, as funding for social policies shifted to military spending, an ensuing crisis of homelessness began. A staggering percentage of the homeless were American veterans of foreign wars, particularly Vietnam, a subject that received much press in 1986, the year he created this painting. The painting’s title suggests Azaceta’s very personal ruminations on the cost of individual freedom, sacrifice to country, and the debt owed its heroes.