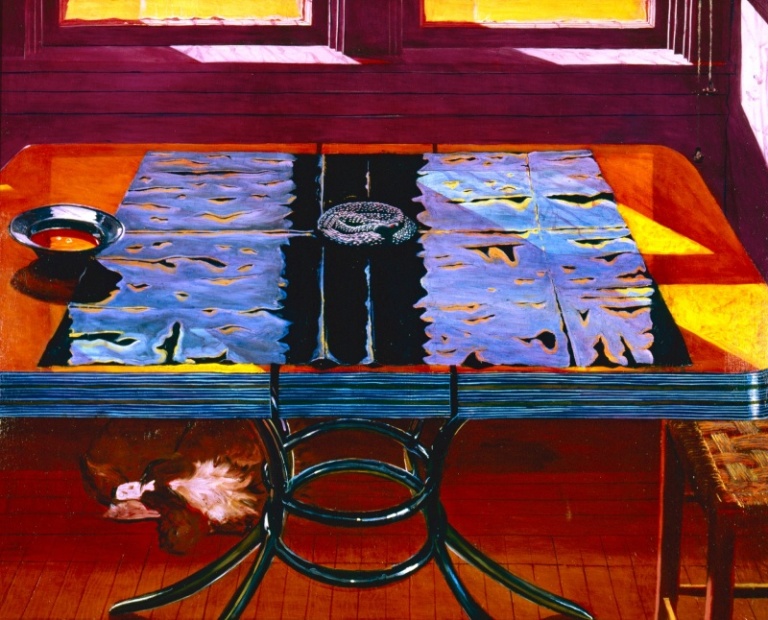 During the 1960s, especially in California, Chicano artists began to explore personal identity amid the momentum of the civil rights movement. Eduardo Carrillo, in particular, mined the vast Pre-Columbian and Hispanic cultural inheritance for signs and symbols. Born in Santa Monica and a graduate of the University of California, Los Angeles, Carrillo created an art of personal, enigmatic revelations, on canvas and in public art.

As early as his graduate studies and an early solo exhibition at the Los Angeles Ceeje Gallery, it was apparent that Carrillo’s interests were narrative and allegorical, setting him apart from Southern California Hard-Edge Painting, Pop Art, and L.A. Finish movements. In 1966, Carrillo moved to La Paz, Baja California, home of his grandparents, and established the Centro de Arte Regional, which he directed until 1969. His activist bent, however, faltered on his return to Los Angeles. The violence that marred the Chicanos against the Vietnam War demonstration in August 1970 disillusioned him, and he moved to Sacramento for a brief time. Testamento de el Espíritu Santo (Testament of the Holy Spirit) exemplifies Carrillo’s resulting turn to the visionary. The coiled snake — in reality an ashtray — is a Pre-Columbian symbol of profound importance, signifying spiritual awakening. (1)