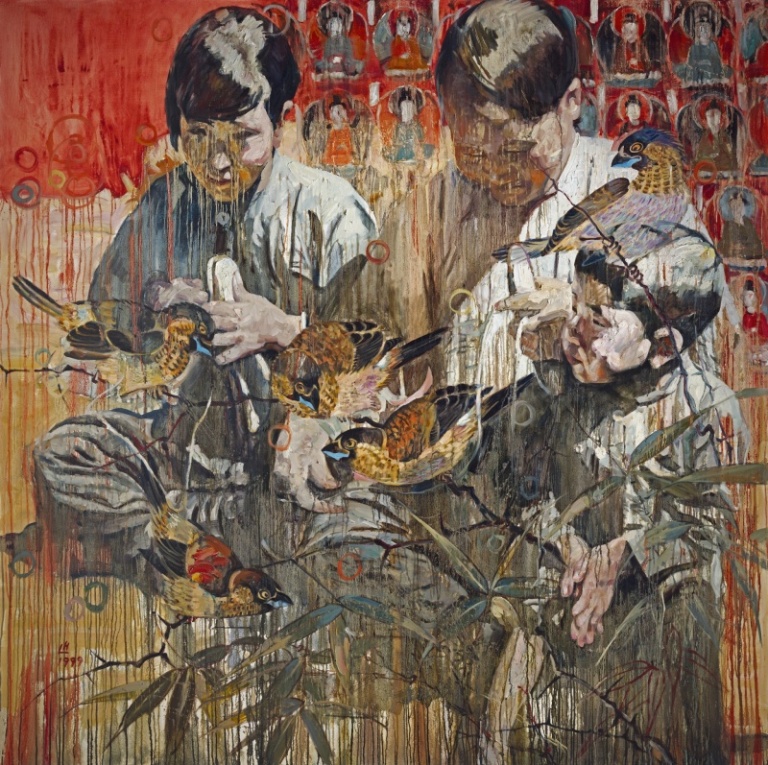 Hung Liu finds the subjects for her paintings in the surviving anonymous photographs of China and its people — images taken by foreigners in the early 20th century. Photographs, particularly personal photos, were considered dangerous when the communist government gained control, and they were targeted for destruction during the ensuing Cultural Revolution. Governmental fear of the past ultimately aimed to quash individual identity, foremost by erasing family bonds and centuries-old traditions.

Hung Liu’s fascination with recovered photographs is strongly influenced by her own experiences of separation, loss, and immigration. Her paintings address the cataclysmic changes wrought on China by politics and forced modernization. Familial relationships and humble activities, such as the shoemaking taking place here, are retrieved as if through veiled remembrance. Old meets new in the juxtaposition of icons of Chinese history — its religious and artistic heritage — with the thin washes of paint that dissolve the family portrayed.

While grounded in the Chinese experience, Liu’s paintings ultimately offer a universal meditation on the human condition. A two-time recipient of the painting Fellowship from the National Endowment for the Arts, Liu is a member of the faculty at Mills College in Oakland.