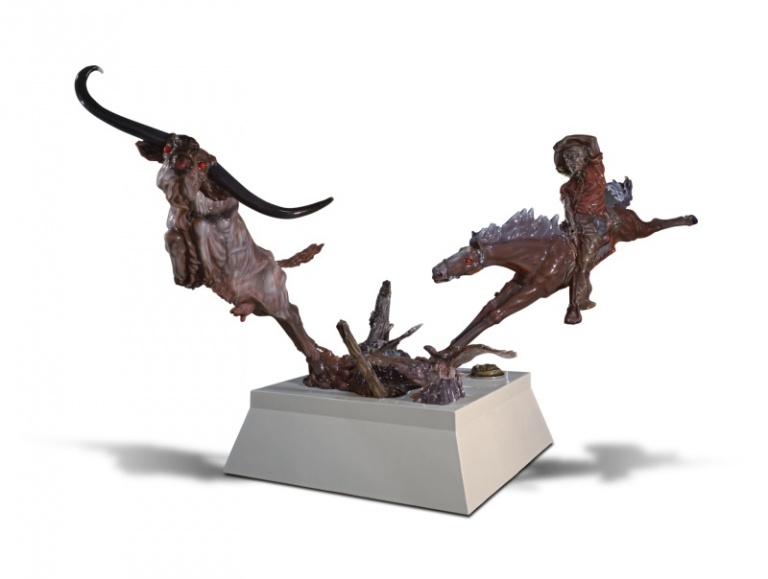 Progress I and Progress II are the first monumental sculptures in fiberglass Luis Jimenez ever made. The theme of progress throughout art history has served as an allegory of the ambitions of individuals and empires. Jimenez’s allegory, however, elaborates the dynamic relationships of the ancient Southwestern desert, especially among predator and prey, from the bottom of the food chain up. Formed from an exceedingly complex mold, the vaquero, steed, and longhorn cow soar in a cantilevered expanse measuring 21 feet across.

When Jimenez first began working with fiberglass in the 1960s, he did so with an iconoclastic spirit, purposefully using the material of hot tubs and hot rods instead of bronze and steel. In doing so, he was not unlike contemporaries such as Claes Oldenburg with vinyl, Tom Wesselman with vacuum-formed plastic, and Bruce Beasley with cast acrylic. Also unique to Jimenez’s sculpture was his use of commercial airbrushing techniques to paint his sculptures with dazzling detail in sparkling, metallic color.

While Jimenez was interested in addressing popular culture in his art, he felt a pull toward a more personal representation that drew upon his childhood experience. In 1971, he left New York City and returned to the Southwest to reexamine his heritage. Being of Mexican-American descent and raised in the borderland of El Paso, Texas, the artist began exploring themes regarding the peculiarities of border life, cultural assimilation, and an abiding respect for nature. Works exploring such themes, vibrantly colored and often unnerving, were his focus until his accidental death in 2006.